Flying With Pagasus and the Flame 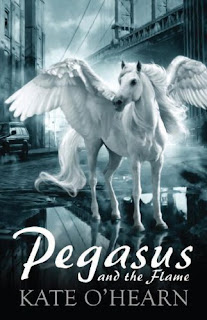 Title:  Pegasus and the Flame (Pegasus Series, Book1)
Author:  Kate O'Hearn
Format:  Audiobook
Length:  8hrs 29mins
Publisher:  AudioGO Ltd.
Age Range:  Tween
Rating:  3 of 5 Stars
When Pegasus, the majestic winged-stallion, crashes on to her roof in the middle of a storm that blacks-out New York City, 13-year-old Emily's life becomes that of legend: epic battles with gruesome monsters, desperate chases from a corrupt governmental agency, captivating flights astride the beautiful winged-stallion, and one heroic quest to save Olympus before the Olympic flame burns out ...A must for fans of Percy Jackson!
All in all, I would have to say that I would really like to love this this book.  The main characters of Paelin, Diana, Pegasus, and most of all Emily are very well rounded and function superbly
within the context of this read.  The interaction between Pegasus and Emily steals the show as well as readers' hearts at several key moments during this story.  The reader becomes so invested in the ups and downs of these two, that he or she is more than willing to forgive some pretty major holes in supporting character development.
Paelin...I  consider him to be the character that the reader "loves to hate to love."  He starts as the bad guy; only to metamorphose into the unlikeliest of heroes.
The Goddess Diana...I really feel that she was a bit scattered.  One minute she's "kick ass tough" and the next she's crying over the maltreatment of horses in Central Park.  The author also goes to great pains to make her inept in our technological society.  (She's a GODDESS!...Hello!)  She should not be walking around referring planes as "flying machines."  As a matter of fact, she should not be walking period.  Ever hear of materialization.

Oh Lucy...You've Got Some 'Splaining To Do!
Now we get to the part of the review that contains those elements that serve as 'nails on chalkboard' moments for me.
The Nirads serve as the invading evil of the story; but readers are never told why they invade or where they come from.  It is also never clear why they are able to just barge into Olympus like it is Walmart and kill GODS.
CRU aka Men In Black...They have agent alphabet names and torture children for information.
(SERIOUSLY)  They vacillate between big bad wolf at the door and too stupid for words. Once again, the devil is in the details.
This is a very good mid-grade read.  I would recommend this book for ages 8-12.
The world of fantasy and the use of Roman mythology will capture the heart and mind of any tween.
Audiobook Review
Katherine Fenton is an excellent narrator.  She is able to convey deep emotion whether voicing male or female roles.  Her transition between narrator and characters is seamless.  I highly recommend her.