I'm On Fire for "Angel Burn" 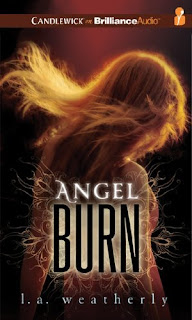 Title:  Angel Burn (Angel Trilogy #1)
Author:  L.A. Weatherly
Format:  Audiobook
Length:  14 hrs 28 min
Publisher:  Brilliance Audio
Age Range:  Teen-Adult
Rating:  5 Stars
In a world where angels are beyond redemption, Alex thinks he's found one that might deserve mercy. Alex is a ruthless assassin - of angels. Forget everything you've heard about them before. Angels are not benign celestial creatures, but fierce stalkers whose irresistible force allows them to feed off humans, draining them of their vitality until there is barely anything left. As far as Alex is concerned, the only good angel is a dead angel...until he meets Willow. She may look like a normal teenager but Willow is no ordinary girl. Half-angel, half-human, Willow may hold the key to defeating the evil angels. But as the hunter and the hunted embark on an epic and dangerous journey and Willow learns the dark and terrifying secrets of her past, Alex finds himself drawn to Willow...with devastating consequences. Eoin Colfer reinvented the fairy, Stephenie Meyer reinvented the vampire, L.A. Weatherly reinvents the angel! This is a heart-pounding, knuckle-whitening, paranormal romance action-adventure for fans of the "Twilight" series. This is the first in a devastating new trilogy.  -Goodreads


I checked this title out from my on-line library after reading the synopsis; and I am so glad that I did.  I have had "not so good" experiences with authors who have chosen to delve into the sometimes very murky waters of  'angelic YA story lines.'
It seems as though most authors go the -Good Angel vs. Bad Angel with hot girl in the middle route.-
May I say,  "Been there, Done that, TIRED, TIRED, TIRED!"

Angel Burn is the answer to a prayer for intelligent, well-written, captivating, angelic-themed YA.

"There are angels among us...and they're HUNGRY!"


Though the characters of Willow and Alex are meant to be the focus of this work; it is the angels that make this story soar.
Why?
The answer is simple.
They are allowed to have ulterior motives, scheme, and plot against those that they are supposedly
here to save.  Yum!  (That is the thing that makes the GREEK myths so irresistible.)
Formula:  Supernatural being + Hidden agenda + Unwitting victims =   Great Fiction
Add to that a strong, smart, and beautiful heroine with unrecognized supernatural gifts, her hot would-be assassin turned love interest, CIA operatives, a manhunt (involving Willow, Alex, and all the people-angels trying to kill them), stellar writing, and a killer plot, and you have Angel Burn.
What else is there to say?  I adore this book!
This story is caviar in a world of sardines!

Audiobook Review
Cassandra Campbell is a star in the world of narration and once again  she delivers.  I really enjoyed the clarity of her read.  She was best however, during the emotional scenes. Where there are tears; there must also be Cassandra.