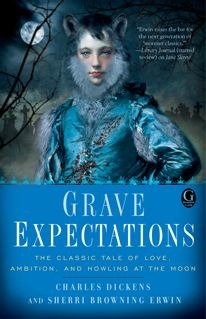 Bristly, sensitive, and meat-hungry Pip is a robust young whelp, an orphan born under a full moon. Between hunting escaped convicts alongside zombified soldiers, trying not to become one of the hunted himself, and hiding his hairy hands from the supernaturally beautiful and haughty Estella, whose devilish moods keep him chomping at the bit, Pip is sure he will die penniless or a convict like the rest of his commonly uncommon kind.

But then a mysterious benefactor sends him to London for the finest werewolf education money can buy. In the company of other furry young gentlemen, Pip tempers his violent transformations and devours the secrets of his dark world. When he discovers that his beloved Estella is a slayer of supernatural creatures, trained by the corpse-like vampire Miss Havisham, Pip's desire for her grows stronger than his midnight hunger for rare fresh beef. But can he risk his hide for a truth that will make Estella his forever - or will she drive one last silver stake through his heart?  -Book cover synopsis

Readers the world over will thank authoress Sherri Browning Erwin for her lighthearted, furred, and fanged journey into the world of Dickens.  This is not to say that her version is meant to eclipse the original; just to be a more palatable kin that the reader will invite to stay and to whom the three day guest rule will never apply.

Pip as Were
The evolution of Pip as a were does a lot to give cause to much of his fuss, worry, and hardship in this work.  It makes him part of a much maligned under-class and makes any chance of advancement seem as far away as the moon.
Add to that the contention that his were state seems  to create between he and his shrew of a sister (Mrs.Joe) whom the reader may infer wishes to be wolf herself  and is quite put out by the fact that she must instead suffer the fate of housewife and keeper of the offending 'whelp.'
Lastly, there remains the fact that Pip wants to be all of the things that the stigma of his were status prohibit.  He is in no way content to be relegated to the meager life that has been plotted as his life's course.

Pip's Love
Estella made Pip "want to be a better wolf."  Through his interactions with Estella and the vampirically eccentric Miss Havisham, Pip is made acutely aware that he "could be accepted into fine company."  It is after his introduction to the lovely Miss E. and her guardian that Pip's angst and discontent at his life begins in earnest.  (Robert Pattinson...eat your heart out!)

This version of the the Dickens' classic does a better job in communicating the desperation that Pip feels because of  the misfortune of his birth to a modern audience.  Due to the fact that we now know that it is possible to overcome the confines of station, breeding, and money; there is a certain disconnection between Dickens and 2011 readers.  What was once the height of social commentary on the evils of classism; is now seen as a dry and boring whine fest.
Though expressed in fictionalized terms, the characters in this work are truly locked into their stations by their circumstance and have good and clear reasons for their hatreds, slights, and baser motives.  (Lets face it folks...when you're a vamp, were, or your husband's reanimated corpse of a housemaid, there isn't much to be done in changing that.)
By the same token, it is also the immutable constraint of said circumstance that makes each victory, friendship, and realization of love all the more sweet.

Reviewer's Note
I would personally like to thank Sherri Browning Erwin for her care and dedication to the preservation of the spirit of the original work.  It is my feeling that she will inspire a new generation to rediscover the joys of classic literature through her efforts.