"Michael Vey" Is My Hero 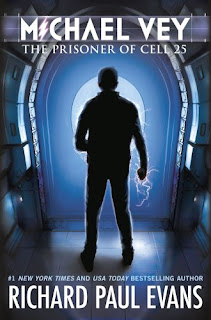 Title:  Michael Vey:  The Prisoner of Cell 25
Author:  Paul Richard Evans
Format:  EBook
Length:  326 pages
Publisher:  Mercury Ink
Age Range:  9-14
Rating 5 stars
My name is Michael Vey, and the story I’m about to tell you is strange. Very strange. It’s my story.
To everyone at Meridian High School, Michael Vey is an ordinary fourteen-year-old. In fact, the only thing that seems to set him apart is the fact that he has Tourette’s syndrome. But Michael is anything but ordinary. Michael has special powers. Electric powers.

Michael thinks he's unique until he discovers that a cheerleader named Taylor also has special powers. With the help of Michael’s friend, Ostin, the three of them set out to discover how Michael and Taylor ended up this way, but their investigation brings them to the attention of a powerful group who wants to control the electric children – and through them the world. Michael will have to rely on his wits, powers, and friends if he’s to survive.  -Goodreads


"Michael Vey" will engage the reader from it's opening pages until the very end.  The characters are well written, fully developed, and most importantly, they behave and speak in ways that are true to both their chronological and emotional ages.
This novel also stands as yet another shining example of  what I like to call an 'inclusive' story line.
'Inclusive' story lines are those ensure that there are no 'main characters'; giving each of a series of very strong personalities his or her time to shine throughout the novel's progression.
This is an excellent read for a boy or girl from the ages of about 9-14.  The non-stop action and twists in a not so complex plot are just the right fit for this age group.    This book is the literary answer to the "Heroes" television series, complete with the cheerleader and much better writing.