Indie Author Spotlight: "Mocked By Faith" Is No Tease... 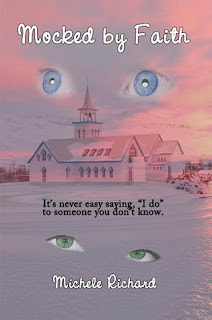 Title:  Mocked By Faith
Author:  Michele A. Richard
Format:  Kindle E-book
Length:  221 pages
Publisher:  The Writer's Coffee Shop Publishing House
Age Range:  Adult
Rating:  4.5 stars
For Alexia Cross and Justin McNear, things are not what they seem. Both were born and raised in hidden, gated communities. A place where time virtually stands still and marriages are arranged by parents before a child’s 18th birthday.

Alexia is destined to be her community’s first spinster. In a last ditch effort, a husband is found. The only complication? He has no idea he has been betrothed. Will his history of dating outsiders help or hinder his relationship with his future wife?

Justin McNear searched outside his church for the woman of his dreams. Returning home after failing, he knows he needs to rectify his life and his faith. Can a woman he’s never met make him whole again?

Will this couple end up mocked by their own faith? Follow Alexia and Justin through the trials and tribulations of finding, falling, and surviving each other's love. It’s never easy saying “I do” to someone you don’t know.   -Goodreads


Destined?
Alexia Cross and Justine McNear live in a world where serving God means loving each other and the children that they are bound by their faith and a marriage contract to produce.  The problem with this seemingly simple scenario is they don't know each other.  Their marriage and the life that they are expected to lead following it; is not one planned by lovers who have spent years nurturing a maturing love based in friendship and mutual respect.
Their union is one forged by their parents and their faith and involves two people who are unsure of themselves, each other, and the world.
Readers will fall in love with Alexia and Justin as they journey with them through the ups and downs of this heartfelt read.  Though the concepts of a "closed society" and "arranged marriage" may seem foreign in today's society; the trials and tests of faith they face are universal.
Virginity, Marriage, and Passion...Oh My!
When beginning this book, one might assume it to be a YA genred  read.  This could not be further from the truth.  Though the characters are young; the situations in which they find themselves are definitely adult.  Authoress Michele Richard takes allows her audience to take an unflinching look at the real-world value of maintaining one's virginity and the passion and desire that the sacred bonds of marriage can foster.  This story is proof that married people can and do have GREAT SEX!
Together We Grow and the More We Know
The story really starts to find it's feet when Justin and Alexia are forced to face and confront their mistakes, fears, and insecurities.  This is where we see them grow as individuals and as a couple.  Though this dynamic is most closely examined in the relationship between the two main characters; it is present throughout the stories of supporting characters story-wide.
Final Thoughts
This story is about so much more than can be effectively related in this one review.   Michele Richard has managed to craft a story that gives each reader his or her own kaleidoscopic view of the picture she has so skillfully created.  For this reviewer this book was a testament to the power of faith, love, forgiveness, and the freedom of truth.
'And the two shall become one flesh.’ So they are no longer two but one flesh.  Mark 10:8
And Now...A Few Words From the Authoress:
Michele A. Richard

1. Where did the inspiration for "Mocked by Faith" come from?

Strangely enough it just popped into my head in the freezer section. I
looked up at an elderly couple and just wondered what it would be like to
marry someone you didn't know. I have actually met a lovely woman who had
her marriage arranged and has been with husband for over forty years.


2. Did you model Justin after any certain person.

No, he was a combination of different characteristics I'd been attracted
to in my youth. I've always loved darker hair with dark blue eyes. I guess
he sort of looks like a young Tom Brady with blue eyes.

No, definitely not. The marital sex cancels that out. My first book was,
and even though it was about teen pregnancy, it doesn't reveal the steps
needed to procreate.


4.  What is your opinion of arranged marriages?

I think its important to respect a persons belief in it. If that makes
sense. If I'd been raised to believe in it I would. I think it is right
for some and not for others.

5.  What would you say is the message that you are trying to convey to your readers in "Mocked by Faith"?

To respect other's choices and ways of life. Just because you don't
believe in it doesn't give you the right to disrespect their beliefs. From
Mahatma Gandhi to Stephenie Meyers, many have said "Live and Let Live"
It's a motto I've always followed and believe more people should.

WTF Are You Reading would like to extend our sincerest thanks to Michele Richard for granting this site the honor of reviewing such a wonderful work.

Thank you for allowing us to help you touch the world!

Email ThisBlogThis!Share to TwitterShare to FacebookShare to Pinterest
Labels: Indie Author Spotlight: "Mocked By Faith" Is No Tease, Michele A Richard, Mocked By Faith..