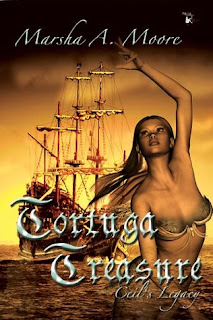 When Ciel first looks into Alvaro’s eyes she finds love. Bad timing. In the next instant he’s fatally stabbed in the back by one of his pirate mates. Her girlfriends warn her it will only bring on a heap of trouble to save him. Unable to resist, she gives him the gift of a new life as one of her kind--a merman.

Will their love encourage him to embrace life as a merman? Can love survive if he wishes to return to human form? Either way, her friends speak true. No matter how much mermagic and dark vodou Ciel and her friends cast, blood-thirsty buccaneers chase them across the Caribbean until Alvaro finally decides.

"Tortuga Treasure...Ceil's Legacy" is a veritable treasure trove filled to the brim with magic, danger, merfolk, pirates, and romance.
Readers can't help being swept into the action of the story from its opening pages.  This is not to say that the story in and of itself is rushed in any way.  Marsha A. Moore does a wonderful job of balancing the quieter moments within this read with the more action packed scenes; taking great care to ensure that neither aspect is allowed greater precedence.

The Mer
In a world where tales of mers abound, this one puts quite a different spin on things.  In this water read, Ceil and her mer companions show no hesitation when taking to the land during their quests.  The fact that they actually come out of the water and walk on their fins, gives this story and the mer legend an entirely new dimension.
No longer are the mers water-locked or forced to give up their fins to interact with humans.  The mers ability to come on land while remaining mer allows them a greater control over their responses to  situations that they encounter and makes them more of a force to be reckoned with.

The Magic
This book is filled with so much magic that it would make Harry Potter blush.  Because there is so much that is charmed within this read; we are allowed to see all of the sides of what is magical.  Mers are of course expected to carry with them the enchantments of the sea, and we see that.  What is new and different is that
humans and even animals are allowed to carry and weld charms that are equal to those of the magical merfolk.

The Men
This book has all the men that a mer-girl could want and it seems that Ceil has more than she can handle.
If they are not trying to capture her heart, they are after her body or trying to kill her.  The romantic entanglements, fights, and all other interactions between Ceil, her gal pals, and the men in this story are not to be missed.

The Message
This book is evidence that good things come in small packages.  If you like stories where hearts are true, battles are bloody, love conquers all, and fins are fabulous...this is the read for you!

This review was brought to you in cooperation
with 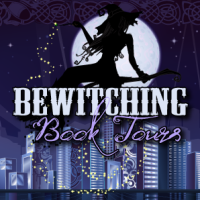