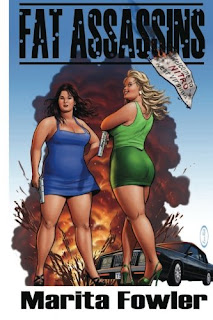 Southern style sweet potatoes Shasta and Ulyssa have stuck together through thick and thin since their escape from third grade fat camp. But on one dark day, they both find themselves unemployed. A hazardous job hunt sees them turn down egg harvesting, drug dealing and phone sex before they settle for an exterminator job. Confusing mafia lingo leaves the girls thinking they’re being interviewed to cope with a rodent infestation. Confident that they can handle the job, they oversell their skills and demand half payment up front to seal the deal. Skeptical at first, the mob boss decides to hire this unlikely pair when he mistakes their attitude for professional stoicism. The girls are shocked when presented with a target profile and an envelope full of cash. They want out, but it’s too late. The mob doesn’t allow do-overs. And certainly not when they’re whacking one of their own. The clock is ticking and when the body count is still zero after multiple attempts, the boss decides to bring in additional assassins to finish the job and tie up loose ends. And the girls just happen to be one of those loose ends.   -Goodreads

Ever have one of those days that you wish you could just...ummmmm...I don't know, skip?
It seems that Shasta and Ulyssa are having more of those than they can count, and you get to come along for the side splittingly funny ride.

You My Dear Have...Real Character
This is a book that is built on the wonderful cast of colorful characters that Marita Fowler has manged to both craft and bring to life with a seemingly effortless perfection.
Though this book is written in a comedic voice, the characters are not written to parody life.  If anything, this book brings life to it's reader in a technicolor clarity, allowing  them to experience the full rainbow of the emotional spectrum within its pages.
There can be no better example of this than the story's heroines Shasta and Ulyssa.  They are in essence every woman.  They are your mother, sister, aunt, and yes, the checkout clerk at Wal-mart.  On the surface they appear sweet, loveable, and maybe even a little naive;  but back these babes into a corner and they'll come out shooting.

You Want Me To Whaaat?
This entire story and the high jinx which ensue are based on that question.  Whether it be Shasta, Ulyssa, or one of the many outlandish residents of Nitro, West Virgina; someone somewhere is always fulfilling some whacky wish with hilariously askew results.

What You Really Need to Know
When deciding if you should read this book there are just a few things that you show know.

1.  This book can be hazardous to your health if read while doing any of the following:
Eating or drinking- you will laugh so hard that choking could occur and drastic measures may have to be employed to save you.

2.  The characters in this book are fictional though it may seem that the author has been following your crazy relatives around with a camcorder and writing down what they say and do.

3.  Walmart is indeed a holding station for the not so criminally insane elements of any town.

5.  This is THE BEST BOOK EVER AND YOU SHOULD READ IT NOW!