Hollow Tours Presents: Before You Go 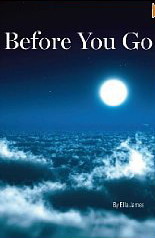 Margo Ford just became an heiress. Not the Paris Hilton kind. Her billions came after her father died and her insanely wealthy, insanely absent mother officially claimed her. Unfortunately, some terrorists noticed, and they hatched a plot to kidnap her. After a news report goes awry, reporting that Margo *has* been kidnapped, and her mother offers the humiliating sum of $500,000 for her return, Margo doesn't want anything to do with her *#$!@ of an egg donor. Then she is sentenced to a summer of "protection" on her mother's private island. Not the Oprah Winfrey kind. This one has an astronomical observatory filled with scientists, including Logan Greer, a super hot, super infuriating planet-hunter. Hiding out from kidnappers has never been so boring... until suddenly it isn't anymore.

Ella James does a wonderful job of bringing her readers into the sheltered, privileged, but loveless world of Margo Ford.  Readers are immediately struck by her loss, sorrow, insecurity, and her need for an emotional port in the turbulent storm that is her life.
When she meets Logan, the handsome young pilot that is hired to take her to her "mother's" island; she is immediately swept away on a tide of desire that sets her adrift in very unfamiliar waters.

This book is a wonderful example of all of the things that a novella should be.  It is well-written and the characters are well defined, so that the reader doesn't have to spend time trying to figure out who is doing what and why.   There is a definite focus on Logan and Margo's relationship without sacrificing the importance of other players  to the drama as a whole, and individuals within the work are written in such a way that they are instantly relateable  to readers.

This is a joy to read and will bring a smile to the heart of anyone who still believes in true love, chemistry, white knights, princesses, and following one's own star.

This review was brought to you in cooperation