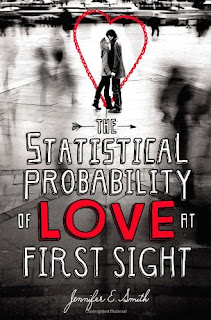 Who would have guessed that four minutes could change everything?

Today should be one of the worst days of seventeen-year-old Hadley Sullivan's life. She's stuck at JFK, late to her father's second wedding, which is taking place in London and involves a soon to be step-mother that Hadley's never even met. Then she meets the perfect boy in the airport's cramped waiting area. His name is Oliver, he's British, and he's in seat 18C. Hadley's in 18A.

Twists of fate and quirks of timing play out in this thoughtful novel about family connections, second chances and first loves. Set over a 24-hour-period, Hadley and Oliver's story will make you believe that true love finds you when you're least expecting it   -Goodreads

Review Disclaimer
Let me begin this review by saying that I don't usually write my reviews in first person, but with this book I felt that there was no other way to truly convey to my audience this book's effect on me other than to do so.
That being said, here we go...

Hadley's irritation, sorrow, confusion, loss, need, anger, and yes, love stood up and screamed at me from the opening lines of this book.  I wanted so much to dive into the pages and slap her father!  The abandonment and betrayal of the father/daughter and familial bonds on which this girl built the foundation of her life had been ripped away and he seemed so ready to just move on!  (Yes...I am screaming in a blog post!)

Jennifer E. Smith will forever have my deepest gratitude for allowing readers of this novel to experience the reorganization of Hadley's family from her POV without excluding or overshadowing the importance or the dynamic of her mother's loss and the way that she dealt with it as well.
Though Hadley's family structure changed, its status as a family did not.  Thank you Miss Smith for allowing Hadley's mother to go through all of emotional turmoil that a separation of that caliber would cause, and still remain Hadley's mother.
Although I feel that in the grand scheme of things, Hadley's father got away with murder.  I cannot fail to acknowledge that he did take responsibility for his role in things.  I have to albeit begrudgingly, give him a bit of a pat on the back for attempting to include his daughter in his new life.

See YA authors...You can have strong parental interaction and respect between parent and child and the book won't self destruct.

Imagine Meeting You Here
The way that Hadley and Oliver met was so natural and unscripted that I just had to stand up and cheer.  Proof that it is often the most ordinary occurrences which have the most life altering effects.   I loved the two of them together from the beginning, and literally had to speed read my way through the areas in this story that didn't concern them; to get back to their parts.
Oliver was just Oliver...sweet, intelligent, wounded, loveable, funny, Oliver.  It was the fact that he was 'just Oliver,' that made him so loveable.
We regular girls the world over get to experience a little wish fulfillment in Oliver and Hadley.  Through them we get to see what happens when an ordinary girl with issues meets an ordinary guy with issues and they become extraordinary together in spite of said issues.

"The Statistical Probability of Love at First Sight" is a beautiful microcosm in which love lost, love found, and love metamorphosed is presented to the reader with an unsurpassed beauty and heart-tugging emotional honesty that any reader would love.

Email ThisBlogThis!Share to TwitterShare to FacebookShare to Pinterest
Labels: Jennifer E. Smith, The Statistical Probability of Love at First Sight