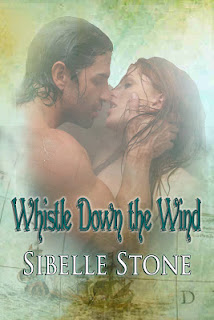 Blurb: Escaping from the persecution of the European witch hunts, a beautiful witch with the power to control the wind joins forces with a handsome Cavalier on a mission to save the King of England and the colony of Virginia. Catlin Glyndwr is a tenth generation Mistress of Elements -- a hereditary witch who can call upon her elemental spirits for assistance in casting spells. Accused of witchcraft in seventeenth century England, she faces the hangman. Even though she took a vow never to hurt anyone with her magic, if her true powers are revealed, she’ll be executed. Sir Griffin Reynolds is on his way to the colony of Virginia, on a secret mission to locate Puritan rebels intent upon seizing the throne of King Charles II. When his best friend becomes deathly ill while interrogating a beautiful Welsh maiden accused of using magic to attack a local official – Griffin is forced to strike a bargain with her in order to save his friend’s life. When Catlin and Griffin travel together on a voyage to the American colonies, they try to resist the pull of erotic sensuality that flares between them. It is a temptation they both soon crave. But danger lurks aboard ship and evil haunts Catlin. She must learn how her destiny is linked with that of the man who has vowed to protect her. In a dangerous and unexplored world, where superstition exists along side the new discoveries of science, powerful elemental spirits are capable of assisting the magical adepts. But there is always danger in harnessing magic and a price to pay when one calls to the spirit world for help. While Griffin tries to deny his attraction to Catlin, she works her own special magic on his heart and he discovers he cannot resist falling under her sensual spell. Together, Catlin and Griffin learn that a journey of the heart requires courage, trust and the ability to believe in the astonishing gift of love.  -Synopsis provided by Author

The story of Catlin and Griffin is one that is built upon the foundations of passion and magic.
What readers are presented with in the pages of this wonderful story is a tale of two magics.
One, that of the supernatural as welded by the beautiful and spirited Caitlin.
The other, that of the carnal as practiced with such tender care by the noble and valiant Griffin.

Though it is clear that the author has gone to great pains to craft the exquisite back-story that surrounds the two; the attraction that these to share and the physical and emotional interactions that result easily take precedence over all else whenever they share scenes.

This is a story that will appeal to those who love adventure and the paranormal with their romance; but please know that it is the romance that is the true star of the show at all times.

If you are a believer in the power of love, honesty, and truth to vanquish every foe; and a lover of unbridled passion, this is the read for you.