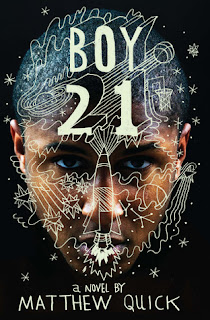 Basketball has always been an escape for Finley. He lives in broken-down Bellmont, a town ruled by the Irish mob, drugs, violence, and racially charged rivalries. At home, his dad works nights and Finley is left alone to take care of his disabled grandfather. He's always dreamed of somehow getting out, but until he can, putting on that number 21 jersey makes everything seem okay.

Russ has just moved to the neighborhood. The life of this teen basketball phenom has been turned upside down by tragedy. Cut off from everyone he knows, he won't pick up a basketball, and yet answers only to the name Boy21—taken from his former jersey number.

As their final year of high school brings these two boys together, "Boy21" may turn out to be the answer they both need. Matthew Quick, the acclaimed author of Sorta Like a Rock Star, brings readers a moving novel about hope, recovery, and redemption.   -Goodreads

My Thoughts
This book is about so much more than basketball.  It is a story of love, loss, and the healing power of friendship.
The first half of this book introduces readers to Finley, in him we find a boy who would be adrift in the sea of his life if not for the anchors of basketball and his girlfriend Erin.  It is clear from the start that he has undergone life changing experiences that have caused him to retreat inside himself.  The question that remains unanswered until sometime later in the story is the 'why' behind his silence.

By the time Boy 21(aka Russ) enters the picture, readers have fallen in love with the persona of Finley and though we are not quite sure how Finley will be able to help Russ we are confident that he may be the man for the job.  As the story progresses and the relationship between Boy21 and Finley progresses, Finley is asked to sacrifice his position on the basketball team to help his friend.

While this is going on, there are events that cause the dynamic within the friendship to shift and it is Russ who now gets to save Finley.

This is a very emotionally charged read.  It will make even the most jaded reader believe in the power of dreams to create the road out of even the worst situation and the power of love to light the way.