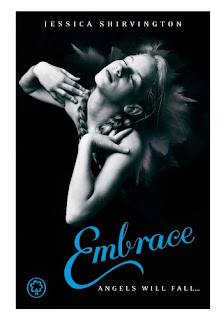 Title:  Embrace
(The Violet Eden Chapters #1)
Author:  Jessica Shirvington
Format:  Ebook
Length:  367 pages
Publisher:  Hachette Publishing
Rating:  4 stars
It starts with a whisper: “It’s time for you to know who you are…”

Violet Eden dreads her seventeenth birthday. After all, it’s hard to get too excited about the day that marks the anniversary of your mother’s death. As if that wasn’t enough, disturbing dreams haunt her sleep and leave her with very real injuries. There’s a dark tattoo weaving its way up her arms that wasn’t there before.

Violet is determined to get some answers, but nothing could have prepared her for the truth. The guy she thought she could fall in love with has been keeping his identity a secret: he’s only half-human—oh, and same goes for her.

A centuries-old battle between fallen angels and the protectors of humanity has chosen its new warrior. It’s a fight Violet doesn’t want, but she lives her life by two rules: don’t run and don’t quit. When angels seek vengeance and humans are the warriors, you could do a lot worse than betting on Violet Eden…

Look for the sequels ENTICED in September 2012 and EMBLAZE in March 2013!   -Goodreads

Feelings...
Emotions abound in this angelic tale of love, betrayal, power, deceit, and redemption.
While it is true that Jessica Shirvington's "Embrace" has a great deal in common with the scores of "Angel themed dramas that populate the YA shelves at present; there is one way in which it is unmatched.

This author has the rare gift of presenting her character's feelings to her audience with a magic that makes them tangible.  When reading "Embrace" readers are afforded the luxury of slipping in and out of the character's changing moods and experiences in much the same way that one would slip in and out of custom tailored clothes.
Lincoln
Here is a guy that any girl would love...if they could get close enough to him or get him to stop running away long enough, that is.  In most cases self sacrifice in the name of 'the greater good' is a good thing.  In this case, not so much.
It seems as if Lincoln's need to give Violet space is often greater than his ability to stand up for and protect his lady love.

Phoenix
He is the wolf in sheep's clothing.  The bad boy who is 'so sweet' that you end up with cavities.
In Phoenix we meet an angel who knows just what he wants and how to get it.
He is the complete opposite of Lincoln in that he is more than willing to take the risk necessary to achieve his ends; while Lincoln is more of the 'color inside the lines and suffer in silence' type.
Violet
Here is a girl that has no idea of where she's going, but is determined to get there come hell or...angels.
It is this 'never say die' spirit that will make readers stand up and cheer for her victories and despair in her hurts and failures.  She is a very smart girl, who has the ability to kick ass and love with the same honest intensity.  She may be a little 'blue', but she is no shrinking Violet.

Final Thoughts
There are no fatal flaws within the book itself other than the 'been there done that' concept of Angels in YA.
As a first book this is very well written and completely cohesive from beginning to end.
The characters and their interactions are flawless and the scenes are vivid.
It is this reviewer's belief that this series can only get better in the books to come, and I can't wait.