It Would Be a Crime...To Miss "Illicit Magic" 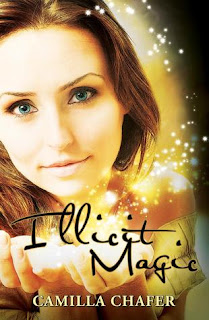 Young witch, Stella, has to put her faith in strangers just to stay alive but she might not be any safer in their midst than from the danger she is running from.

There is more than one dark secret in her new family: Étoile’s sister is spoken of in fear and sadness; Marc is supposed to be a powerful witch but is missing his magic; where does the owner of their safe house vanish to every day and why does Evan have the eyes of someone not quite human? There is only one secret that someone will do anything to keep quiet, but whose secret is it and will Stella have to pay the price for silence?

In "Illicit magic readers will find an older heroine.  Stella is 24, and while this book is still considered YA, the fact that Stella is older allows her a great deal more freedom of movement and does much to give credibility to her "loner" persona.  Although, one comes to see that the "loner" label is somewhat of a misnomer as applied to Stella.
She is not shying away from people because she has some sort of Greta Garbo complex.  She is doing it to stay alive.
It seems that our little English girl is quite the "witchy woman" and has somehow come to the attention of The Brotherhood, an organization of people who feel it their mission to destroy witchcraft at all costs. (Get out the torches and pitchforks boys...we gonna have us a fire ta-nite.)

Coming To America
Not to worry folks...she is saved, but her white knight just happens to be a girl.  That's right, her friend Etolie spirits her away to the US. (I forgot mention that the first part of this story takes place in England-BAD REVIEWER-BAD!!!)
But I digress...

Once she reaches America, Stella meets "The Council," the governing body for witches.
Safety right?
Wrong!
After she is attacked yet again, she is sent to a safe-house to hone her skills while protected.
The story takes a decidedly quiet turn during this time and focuses on her love life, introducing readers to a host of supporting characters in the process.  Be not fooled by the seeming lull, the stillest waters sometimes hold the deepest secrets.

My Two Cents
There is so much to be said about this roller-coaster of a book, but I am just going to have to let you, my dear readers take this ride for yourselves.
If you like a well written tale, full to the brim with British wit, murder, mayhem, love, and a surprise ending...this is the read for you.
There is even better news for fans of this bespelling  read.  There is ANOTHER book.
UNRULY  MAGIC is on sale NOW!

This review  was brought to you in cooperation
with