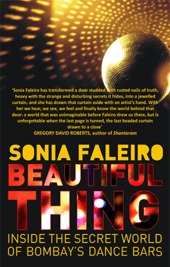 Title:  Beautiful Thing
Author:  Sonia Faleiro
Format:  E-galley
Length:  232 pages
Publisher:  Penguin Books
Rating:  5 stars
Sonia Faleiro was a reporter in search of a story when she met Leela, a beautiful and charismatic bar dancer with a story to tell.

Leela introduced Sonia to the underworld of Bombay’s dance bars: a world of glamorous women, of fierce love, sex and violence, of customers and gangsters, of police, prostitutes and pimps.

When an ambitious politician cashed in on a tide of false morality and had Bombay’s dance bars wiped out, Leela’s proud independence faced its greatest test. In a city where almost everyone is certain that someone, somewhere, is worse off than them, she fights to survive, and to win.

Beautiful Thing, one of the most original works of non-fiction from India in years, is a vivid and intimate portrait of one reporter’s journey into the dark, pulsating and ultimately damaged soul of Bombay.

"Beautiful Thing" is an honest and often heartbreaking look at the lives of the dance bar girls of Bombay India.

My Thoughts
In "Beautiful Thing" author Sonia Faleiro does such an exemplary job of writing in the voices of Leela and those within her circle, that it becomes hard to believe that the riveting tale being told is indeed biographical.
This book provides readers with an 'all access pass' into the shadowy world of Bombay's dance bar scene.

While proving an engrossing and informative read, the stories told here are not for the weak of heart.  This book is filled with stories of sex, violence, money, lies, poverty, and survival.  The people to which readers are introduced within the pages of this drama are perfect examples of what the human spirit can endure when forced to live in conditions where your success and often your life is dependent on how much of yourself you can afford to sell to the highest bidder.
To be born female in Leela's world is to be born a slave.  A female child in Bombay has very few options.
If the truth be known she is often little more than a pawn in cruel game that she has no hope of understanding.  If she is not raped or sold into prostitution by her parents; she marries into a life of servitude to her husband and family.

The 'dance bars' with their promises of fast money and independence with a dash of glamor seem to many a way out.  Little do they know that they often trade the 'frying pan' for a 'fire' that is too hot not to burn.
In many ways the lives of the dance girls of Bombay mirror those of  'strippers' in the Western culture.
It is a world that is fraught with drugs, death, and shame in a society where the appearance of immorality can do more damage than the actual immoral acts themselves.