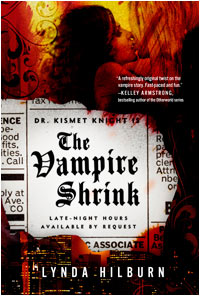 Kismet Knight, PhD, doesn't believe in the paranormal. She especially doesn't believe in vampires, but she begins to wise up when she is introduced to a handsome man named Devereux who claims to be 800 years old. Kismet doesn't buy his vampire story, but she also can't explain why she has such odd reactions and feelings when he is near. Then a client almost completely drained of blood staggers into her waiting room and two angry men force their way into her office, causing her to consider the possibility that she has run afoul of a vampire underworld. Enter FBI profiler Alan Stevens, who warns her that vampires are very real, and one is a murderer—a murderer who is after her   -Goodreads

Kismet is defined as "fate or destiny" and after having read Lynda Hilburn's "The Vampire Shrink," this reviewer is quite convinced that that is a story that readers are destined to love.

As it happens, Kismet Knight PhD, is also the unlikely heroine of our little tale.  In Kismet readers will find a woman who should have the world on a string...beautiful, talented, brilliant...empathic.
Yep, that's right!
Look out Sookie Stackhouse, our girl Kismet's got skills.
The thing is she's afraid to use them.
The fact is Kismet is afraid of pretty much everything that doesn't involve  other people's problems.
She uses her practice and her quest to solve the psychological 'rubic's cubes' that are her patent's minds to escape her life's own 'unsolved mysteries'.


Until...
Midnight
Midnight is Kismet's newest and strangest patient.  A young lady with a troubled past, an uncertain future, and a story that will change Kismet's life forever.
Oh yeah,  she's got fangs too!
Well sorta.


Is She Crazy?  Or Is It Devereux?


What's not to like here?  He's rich, cultured, and Norse god sexy.  He's also Kismet's second fanged client.  Only...his fangs are real.  Devereux is an 800 year-old vampire and the central character in Midnight's couch confessions to Dr. Knight.  Though her psychic bells and whistles go hay wire every time he comes near her; our dear Dr. just can't see the fangs right in front of her.  She can however, feel the HEAT.
The attraction between these two is strong enough to create black holes in space.

But, there are no such things as vampires...right?


Out Of the Frying Pan and Into the Fire

If there is one thing that Dr. Knight can't seem to get enough of, it's mysteries, and after the biggest one of her life literally walks into her office, the floodgates open and all bets are off.
The story told here has everything that a reader could want:
1. Murder
2. Mayhem (most of the fanged and bloody sort)
3. Love triangles (seriously...triangles, as in more than one)
4. Mysteries
5. Psychology
6. Magic
7. Romance (sex not sold separately)
8. VAMPIRES
Wanna read it yet?

In short...
This book is many things: paranormal romance, mystery, psychological thriller, and comedy.
Lynda Hilburn skillfully manages to craft an intelligent story that encompasses a wide range of varying genre elements in a way that is simply unputdownable.  Her characters are likeable, unique, and completely fine with being flawed, weird, or 'off their beams".
The pacing of this read is never rushed and the transition from action to drama or romance is seamless and never predictable.
The scenes within this book are written in such vivid detail that each one etches itself in the mind of the reader in much the same way that a favorite snapshot captures a treasured memory.
This story is one that wraps itself around you like a blanket fresh from the dryer. Leaving you smiling  and happy long after the book is closed.


...and as if all that was not enough, it's the first book in a series!