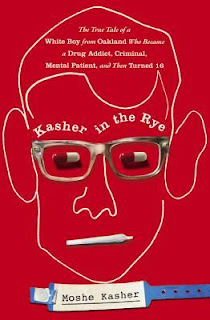 Rising young comedian Moshe Kasher is lucky to be alive. He started using drugs when he was just 12. At that point, he had already been in psychoanlysis for 8 years. By the time he was 15, he had been in and out of several mental institutions, drifting from therapy to rehab to arrest to...you get the picture. But KASHER IN THE RYE is not an "eye opener" to the horrors of addiction. It's a hilarious memoir about the absurdity of it all.

When he was a young boy, Kasher's mother took him on a vacation to the West Coast. Well it was more like an abduction. Only not officially. She stole them away from their father and they moved to Oakland , California. That's where the real fun begins, in the war zone of Oakland Public Schools. He was more than just out of control-his mother walked him around on a leash, which he chewed through and ran away.

This is a very eye-opening read!  It is the perfect read for adults who say things like, "You're not old enough to have problems!"  This book is proof that there is no such thing as too young!  You spend pages following the young Mr. Kasher through a drug and booze soaked childhood that would make Keith Richards blush.  It is nothing less than a miracle that enough of his brain cells have survived the abuse that his "too high to die" lifestyle inflicted upon them at such a tender age.
The dark hilarity that permeates the pages of this book will fill you with the courage you need to turn that next page and the strength to laugh your way through the train wreck that you find there.
This book is less about the drugs, poverty and drink that feature so heavily in it's pages, and more about the
aimless wanderings of a  scared, hurt boy just trying to find himself in a lost world.  Within this read parents will find the answers to some of the question that they are afraid to ask.

1.  Do the things I say about my child's father or mother really matter to them?
2.  How important are my child's friends.
3.  How much do I rely on others to tell me what's right for my child?
4,  Do we really communicate?

This is a book that I would highly recommend to children and the parents that love them.