Adult Paranormal Thriller: You Won't Want to Wait for "Nightfall" 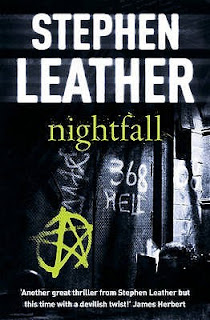 'You are going to Hell, Jack Nightingale.’ They are the words that ended Jack Nightingale’s career as a negotiator with the Metropolitan Police. But two years later, when Nightingale is a struggling Private Eye, the words come back to haunt him. Nightingale discovers that he was adopted at birth and that his real father, a confirmed Satanist, sold Nightingale’s soul to a demon from Hell. And on his thirty-third birthday – just weeks away – the demon is coming to claim its prize.   Goodreads

Nightfall is a fast-paced 105,000 words and is the first in a trilogy about the occult detective


My Thoughts
This book has so much to love when what one wants is "a thinking man's thriller."  What that means for the reader is a mystery in which the author allows his reader to actively participate.  By choosing this approach, Stephen Leather effectively bonds his audience to the characters, giving us a stake in the outcome of the book.

Jack Nightingale is a man that has had the well worn carpet that he thought was his life pulled out from under him in the most bizarre of ways and under unbelievable circumstances.  The opening scene of this read is in and itself enough to leave even the most jaded adrenaline junkie gasping.  The amazing thing about this book is that while must reads tend to sink into a mire of explanations and spoon fed plot twists; this story expands and evolves with the discovery of each "why" and its often unexpected answer.
The paranormal aspects of this saga are never allowed to completely overtake the plot due to the fact that Jack is so conflicted within himself about his stance on whether the things that he is experiencing are real, or if he is completely "nutters."
Making matters worse for Jack is the fact that he is a flawed man from the start, and as such, is not quite sure that his moral compass is ever pointing "true north."

In short.  If you like your reads heavy on the Englishmen, coffee, ciggies, murder, mystery, devils and WTF moments ...this is the book for you!
Like Nightfall?
Don't miss the further adventures of Jack Nightingale
in:
Midnight
Nightmare

"There are some sick bunnies out there, Jack."   -Nightfall

Get Yours
HERE!
Posted by WTF Are You Reading