I Wanna Be "The Girl In The Steel Corset" 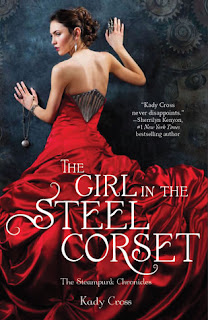 In 1897 England, 16-year-old Finley Jayne is convinced she's a freak. No normal Victorian girl has a darker side that makes her capable of knocking out a full-grown man with one punch. Only Griffin King sees the magical darkness inside her that says she's special . . . that she's one of "them."  -Goodreads

My Review
This is a truly "gush worthy read."  There is so much going on on this book that it's like being locked in a candy store.  You can't isolate one part of the story as the best or the most appealing because its all so good.

Finley
She is a great focus for this read, both for her ability to hold the reader's attention because of her "shadow twin" personality a la Heroes Niki Sanders; and the way that she can give over the spotlight whenever other people in the story need quality face time.
The fact that we meet her as she is fending off a would be rapist in the form of one very drunk Lord Felix August-Raynes, who just happens to be her boss and who neither she, nor her readers are quite sure that she has left alive is just more icing on the "kick ass" cake.

Griffin
If you like Charles Xavier, then you will love Griffin King.  He has money, power, looks, AND he can see and manipulate the astral plane, known for the purposes of this book as Aether.
Don't let his refined exterior fool you, he packs a serious punch.

Sam
He is the "tower of power" in this read.  He is strong, Griffin's best friend, and doesn't trust Finley.
He spends the majority of this read as a foil for Finley.  A fact that if you are a Finley fan (guilty), will make you want to see him get run over by a steam coach.
Don't be too quick to axe him though, he has some major issues of his own that make for great reading as the story progresses.

Emily
She is the coolest version of Mission Impossible's Q ever.  She may be little, but her brain is huge!
The inventions that she creates are steampunk gold.  She also seems to be the emotional glue that holds the group together.

It would be very easy to get wrapped up in the drama that is Finley, but there are so many other secrets and discoveries and oooooh my undercover goodness that Finley is just one stop on the train to literary happiness.
1.  Finley's past
2. Rogue Automatons
3. Sam's Past
4. Inventions Discoveries, Secrets, Lies, Victorian England
I LOVE THIS BOOK!