Adult Romance Review: You Will Never Forget "The Sting of the Scorpio" 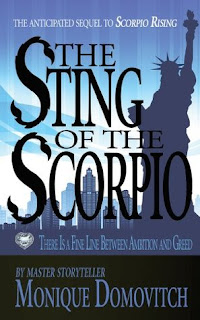 Title:  The Sting of the Scorpio
Author:  Monique Domovitch
Format:  E-book
Length:  192 pages
Publisher:  Lanson Publishing
In Scorpio Rising, Monique Domovitch presented a compelling tale filled with colorful characters and the manipulation of power, ambition, and greed. Now she gives us its spellbinding sequel, The Sting of the Scorpio, where Alexander Ivanov returns to New York with his new bride, Brigitte.

The real estate industry is ripe with opportunity. Blessed with irresistible charm, ambition, and the single-minded obsession to succeed, Alex plots and manipulates his way to almost mystical success. Everything he touches turns to gold, but it’s never enough. When a hostile takeover bid leaves him struggling to save his beloved company, he suspects those closest to him of plotting his downfall.

Brigitte, the beautiful redhead who abandoned her country and her career to become his wife, feels alone. In return, Alex has betrayed her time and again, each indiscretion cutting deeper into her soul.

Brigitte’s son, David yearns to be an artist, but Alex’s plans leave no room for such frivolous goals. He grooms a reluctant David to become the heir apparent until a devastating tragedy attracts the attention of another young man.

The Sting of the Scorpio is a rich tale of a man at the mercy of his own greed and a woman bound by her need for love. -Goodreads


My Thoughts
In this, the second installment of the Scorpio Rising series, readers get to catch up with the newly married Alexander and Brigitte Ivanov as they trade the charm and sophistication of Paris for the non-stop hustle of New York.
One would think that Mr. Ivanov would have the world by the tale as the new husband to a beautiful and talented artist, and father to an adoring son.  In the case of any other man, one would be right; for Alex however, that assumption could not be further from the truth.
Alex, it seems is a man of passions, and having sated his passion of the heart with his marriage to Brigitte; he is off to woo his first love...power.

In The Sting of the Scorpio readers will bear witness to what can happen when the evils of greed and ambition are allowed to go unchecked and "success at any cost" becomes the rule of the day.

While it is true that the tone and direction of this book is distinctly different and more raw than that of the first, the book's author is able to weave a story that is in many ways even more compelling than that of her previous work.
Monique Domovitch's saga of power, love, sex, passion, and ambition is an  entertaining and thought provoking tale that leaves one to question...

Is too much ever really enough?

About This Amazing Authoress

Monique lives with her physician husband and their three dogs. They divide their time between their homes in Canada and La Jolla.

Hop on over to the authors website and enter to win some signed books and Amazon GC's.
Visit the Author:
http://www.moniquedomovitch.com
Buy Her Books:
http://www.amazon.com/Scorpio-Rising-ebook/dp/B005EJGXZ8/ref=pd_sim_kinc_1?ie=UTF8&m=AG56TWVU5XWC2
Find her on Facebook:
http://www.facebook.com/monique.domovitch
Tweet Her:
https://twitter.com/#!/moniquedomovitc