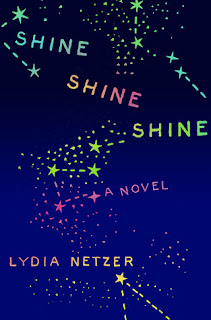 A debut unlike any other, Shine, Shine, Shine is a shocking, searing, breathless love story, a gripping portrait of modern family, and a stunning exploration of love, death and what it means to be human
Sunny Mann has masterminded a life for herself and her family in a quiet Virginia town. Her house and her friends are picture-perfect. Even her genius husband, Maxon, has been trained to pass for normal. But when a fender bender on an average day sends her coiffed blonde wig sailing out the window, her secret is exposed. Not only is she bald, Sunny is nothing like the Stepford wife she’s trying to be. As her facade begins to unravel, we discover the singular world of Sunny, an everywoman searching for the perfect life, and Maxon, an astronaut on his way to colonize the moon. Theirs is a wondrous, strange relationship formed of dark secrets, decades-old murders and the urgent desire for connection. As children, the bald, temperamental Sunny and the neglected savant Maxon found an unlikely friendship no one else could understand. She taught him to feel—helped him translate his intelligence for numbers into a language of emotion. He saw her spirit where others saw only a freak. As they grew into adults, their profound understanding blossomed into love and marriage. But with motherhood comes a craving for normalcy that begins to strangle Sunny’s marriage and family. As Sunny and Maxon are on the brink of destruction, at each other’s throats with blame and fear of how they’ve lost their way, Maxon departs for the moon, where he’s charged with programming the robots that will build the fledgling colony. Just as the car accident jars Sunny out of her wig and into an awareness of what she really needs, an accident involving Maxon’s rocket threatens everything they’ve built, revealing the things they’ve kept hidden. And nothing will ever be the same.
-Goodreads

My Thoughts
Sunny is the perfect example of a person trying to be as perfect as she believes that the people around her to be.
The problem?
Sunny and her family are anything but...
She suffers from Alopecia Universalis, a condition which has left her completely hairless since birth.
Her son Bubber, is autistic.
Her husband Maxon, an AI specialist with NASA, appears to suffer form a mild form of Asperger's Syndrome.
Her mother is dying of cancer.
And...
She's pregnant again.

Sunny is a woman who is living her life in hiding.  She uses wigs to hide the fact that she is bald.  She medicates her son to keep his autism under control.
She denys the fact that she resents her husband for pushing her into motherhood and that she thinks that her son inherited his autism from him.
This beautiful story is all about the transformative  moments in the life of every person.  Those moments in which we are truly able to see ourselves not as we think we should be, but as we are, imperfections and all.  It is these moments which free us from our self imposed  prison sentences of unfulfilled lives and unrealized dreams and allow us to find our place in the world.
This is a book that any person who has ever felt in any way less than should read.  Within its pages you will find hard evidence that though there is no such thing as perfect.  There is happiness in self acceptance.
My Rating: