"Redemption" Is A Read Well Worth Saving!!! 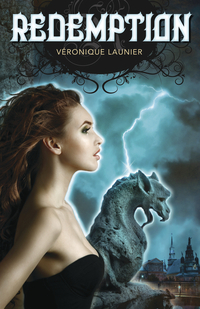 Guillaume: For five hundred years I've existed as a gargoyle. Perched atop an old Montreal church, I've watched idly as humanity wanders by. With the witch Marguerite gone, there is no one left to protect, nothing to care about. I never planned to feel again. But then a girl released me from my stone restraints, allowing me to return as a seventeen-year-old human boy. I must find out all I can about this girl's power . . .

Aude: Getting attacked twice in as many days is strange in itself, but even stranger is the intriguing guy I keep running into. There's something so familiar about him, like a primal drum rhythm from my dreams. But spending time together only raises more questions--about my heritage, a native Mohawk prophecy . . . and an unearthly magic threatening our city..
-Goodreads

Just when you thought the world of supernatural fiction couldn't get any better.  Along comes authoress Veronique Launier and her deliciously haunting tale, Redemption.
Tired of the run of the mill fare of were with a side of vamp and a zombie chaser?
How about Gargoyles?
That's right...
Gargoyles.
Not just any old gargoyles will do, you say?
Well, I've got a whole family of hot French gargoyles living in Canada.
Ooooh la la...right?

Guillaume and Aude are both characters that you will want to get to know from the start.
Guillaume because he is a gargoyle that has just been  awakened from a very long stent in stone and you may be just a little curious as to what it is that he plans to to do with his freedom.
Aude (pronounced ode) because she was the one that possessed the 'energy' that perked up "old stone butt".
As it turns out, his waking up and her powers are just the tips of a very large and very multifaceted literary iceberg involving:
1.  A lost legacy of witchy powers (Aude)
2.  A misplaced guilt for the loss of a love (Guillaume)
3.  A deep love of music (both)
4.  Dysfunctional family units (both)
5.  A destiny that has a lot to do with SAVING THE WORLD (both)
You see...
While the two of them are following each other around trying to figure each other and themselves out.  There are some other people trying to kidnap Aude and kill Guillaume and his family.  The author does a great job of keeping you guessing on who they are and what the want until all the other pieces of the puzzle have fallen into place.  So there will be no spoilers here.
That is not to say that the love affair with this book is not without its share of struggles.
There is the afore mentioned lost love named Marguerite that you may get a litttttttle tired of Guillaume whining about, but hang in there.  There is a good reason for it, although you will have to make it through most of the book to get to the WTF moment that explains it all.
There is so much going on in this book that once you pick it up, there is no way that you can put it down until you are done.
This is a very enjoyable read that can stand alone, but that thankfully does.not.
Yes...there will be more gargoyle-licious goodness!
Ohhhhh joy!

P.S. As if all the other reasons are not more than enough to send to running to buy this book.  You will be over joyed to know that it is written from both Guillaume's and Aude's point of view!
That's right dual POV's !
My Rating: