Solve The Mystery That Is "Henry Franks" 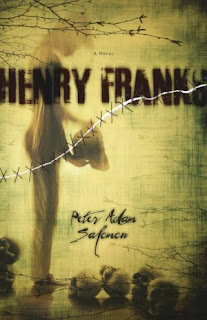 A dark, psychological thriller about a boy's search for himself

Four thousand, three hundred and seventeen stitches, his father had told him once. All the King's horses and all the King's men had put Henry Franks back together again.

One year ago, a terrible accident robbed Henry Franks of his mother and his memories. He can't remember anything: the accident, his mother, his life. The past sixteen years have vanished. All Henry has now are scars and a distant father--the only one who can tell Henry who he is. If only he could trust his father.

Henry tries to piece together his past with help from Justine, his only friend. Could his nightmares--a sweet little girl calling him Daddy, murderous urges, dead bodies--hold clues? While a serial killer stalks their small Georgia town, Henry unearths the bitter truth about his mother--and himself.
-Goodreads

Your heart immediately goes out to Henry, the immensely uncomfortable, sensitive, intelligent young protagonist of this darkly disturbing read.  Readers are almost compelled to follow the trail of clues that wind through this novel in much the same way that the stitches map Henry's skin.
It is in fact Henry's skin that starts the mystery.

Why is he covered in itchy scars?
Why can't he feel pain when he pricks his fingers?
What happened in the "accident" that resulted in his being this way?
WHY CAN'T HE REMEMBER BEFORE?

One of the things that make this book work so well is the fact that there are very few relationships in Henry's life.
There are:
1.Henry and his father-astranged due to his father's unwillingness to talk to Henry about his past.
2.Henry and Dr. Margaret Saville PhD- Henry's therapist, the dynamic here is very clinical due to Henry's insistence upon not letting the Dr. in.
3.Justine-Henry's next door neighbor, crush, and friend.  This is the closest and most evolved relationship of the entire book.  She is a key factor in solving the mystery that surrounds his father and thereby finding the key to his past.

Readers of this book will be interested to note that the author went to great pains to keep things really simple.  The story itself takes place in a small island community, the cast of characters is very small, and Henry's level of interaction is kept to a minimum.  Keeping things with in story on a smaller scale allows the author to focus on scenes that add to the dramatic feel of this read.  This is a technique that is often employed by horror writers.
This book is packed with action, murder, mayhem, mystery and surprises.