"The Boy Recession" Has a Surplus Of Fun 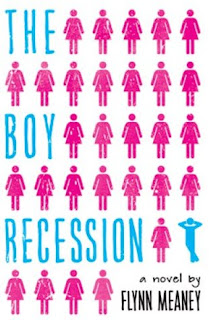 Where have all the boys gone?

Down-to-earth Kelly is always the friend and never the girlfriend. But as her junior year of high school starts, Kelly is determined to finally reveal her true feelings for her long-time crush and good friend Hunter - that is, until the Boy Recession hits.

Over the past summer, an overwhelming number of male students have left Kelly and Hunter's small high school class. Some were sent to private school and others moved away. Whatever the case, the sudden population shift has left the already small Julius P. Heil High in desperate shape. The football coach is recruiting chess champs for his team, the principal's importing male exchange students to balance out school dances,and Hunter is about to become an unexpected heartthrob.

Content with his role as the guitar-strumming, class-skipping slacker, Hunter is unprepared to be the center of attention. Desperate coaches are recruiting him for sports teams, and the drama teacher casts him in the lead role of the school musical. Even the Spandexers, powerful popular girls in tight pants, are noticing Hunter in a new light - with a little work, he could have potential. He might even be boyfriend material...

In order to stand out from the crowd and win Hunter's heart, Kelly needs a "stimulus package" in the form of cougar lessons from a senior girl who dates hot freshman boys and advice on the male mind from her Cosmo-addicted best friend, Aviva. As if dating wasn't hard enough without a four-to-one ratio!
-Goodreads

My Thoughts
This book is for all of the fringe kids.  You know..the friend of a friend of the popular crowd twice removed.
This is a bird's eye view of what happens if all of the popular kids (in this case boys) disappear.
The shocking thing is that readers get to see that the laws of adaptation that are often seen in nature apply in this book.
Noooo... that is not to say that any of the females at Juilus P. Heil High School became male over night like those fish on the nature channel; but some pretty drab slackers in the male department do get to step up to the plate and show their truly awesome colors.

My Favorite Boys
Eugene
If there is something that you want he is the go to guy to get it.  He has the hook up on everything from beer to boys and he can be bought.  Who knew that he also bakes and has the 411 on sophistication and style.  He is the comic relief for this story and it is so fun to see him put his seedier skills to work in the during his time as a big fish in the popularity pond.

Hunter
Hunter is the cute guy that has all the right stuff but just doesn't know what to do with it.
He is the guy that sleeps in class if he comes at all and then scores a 1600 on hi SATs.
He is so sweet, sincere, and talented that you can't help cheering when all that he has to offer comes
to the forefront.

All About the Girls
Kelly
Kelly is not what you would call a 'stand out'.  In fact, she even manages to be the vanilla in the Neapolitan trio of friends.  She's not the smart, but not the super brain that is Darcy.  She's pretty, but not the show stopping boy magnet that is Aviva.
What Kelly is however is determined to do what it takes to get newly popular Hunter to notice her.

This book is hilariously funny without trying.  It has just the right amounts of teen cluelessness, self deprecation, epiphany, and swear words to make it a truly great coming of age story.
This is a summer read not to be missed.
Every dog has his day?
Can Hunter run with the big pack?