"Kissing Shakespeare" Will Leave You Breathless 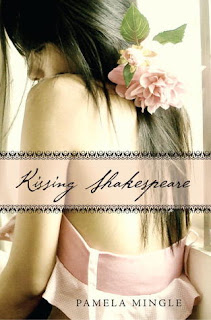 Title:  Kissing Shakespeare
Author:  Pamela Mingle
Format:  E-galley
Length:  352 pages
Publisher:  Delacorte BFYR
Rating: 5 stars
A romantic time travel story that's ideal for fans of novels by Meg Cabot and Donna Jo Napoli--and, of course, Shakespeare.Miranda has Shakespeare in her blood: she hopes one day to become a Shakespearean actor like her famous parents. At least, she does until her disastrous performance in her school's staging of The Taming of the Shrew. Humiliated, Miranda skips the opening-night party. All she wants to do is hide.

Fellow cast member, Stephen Langford, has other plans for Miranda. When he steps out of the backstage shadows and asks if she'd like to meet Shakespeare, Miranda thinks he's a total nutcase. But before she can object, Stephen whisks her back to 16th century England—the world Stephen's really from. He wants Miranda to use her acting talents and modern-day charms on the young Will Shakespeare. Without her help, Stephen claims, the world will lost its greatest playwright.

Miranda isn't convinced she's the girl for the job. Why would Shakespeare care about her? And just who is this infuriating time traveler, Stephen Langford? Reluctantly, she agrees to help, knowing that it's her only chance of getting back to the present and her "real" life. What Miranda doesn't bargain for is finding true love . . . with no acting required  -Goodreads


Debut authoress Pamela Mingle, manages to bring together the genres of YA and Historical Romance, weaving eye-opening social commentary, meticulous attention to detail, and a bitter-sweet love story into a vibrant tapestry of scenes that will captivate the minds and hearts of all who read it.

The Players
Miranda/Olivia- When we are first introduced to her, it is very easy to pity her.  She seems to be lost, largely ignored by the adults in her life, and looking for her own place in the spotlight.  It is not until she is thrust into the role of Olivia, that she truly comes into her own.  She is able to voice her own opinions, stand up for her rights as well as those of the people that she cares about, and make choices of the heart with confidence and conviction.

Stephen-At first glance, he seems all business.  He's a man on a mission who can't be bothered with niceties.  As the story progresses however, we come to know the softer side of Stephen.  We come to see that he is capable of great love and great sacrifice.

Will-Readers will be happy to note that the author goes to great pains not to impart any delusions of grandeur or airs to the young Shakespeare.  We are allowed to see him as an unsure youth with an insatiable love for the written word.  Hearts will go out to the innocent young man who has no idea that he is at the center of a life or death struggle  for power that could change the world forever.

Jennet-Looks are definitely deceiving with this quiet Quaker.  Always in the shadows, she watches and waits.  What secrets does she hold?  To what end is she using the secrets of others?

The Tale
This story start as one in which Miranda and Stephen are meant to go back on time and save Will, thereby saving the legacy that he creates through his work.  What readers quickly come to see however, is that this story is far more involved than one would suspect.  After traveling back in time,  Miranda and her audience come face to face with issues of religious persecution, the inequality of woman in society, and marked differences in the socioeconomic dynamic that were simply accepted as proper for the period.
Watching Miranda deal with the issues with which she is confronted knowing that she must fight her modern sensibilities for the greater good, gives a authenticity to the fight for Shakespeare that might not have been achieved otherwise.
As if all of the afore mentioned plot twists were not enough.  There is also the mystery and intrigue surrounding a certain priest and an unlikely love triangle involving Miranda/Olivia, Will, and Stephan.

Happy Endings
This tale of love loss, and the pursuit of happiness is one that will speak to readers in an ageless voice that transcends time and space in much the same way the words of its namesake have manged to throughout history.

Will Miranda and Stephan manage to save
Shakespeare before his genius is lost forever?
Can Miranda find herself in the guise of another?
Will Stephan lose his heart while the girl he loves
is
KISSING SHAKEPEARE