You Won't Want to Let Go Of "The Georgian Embrace" 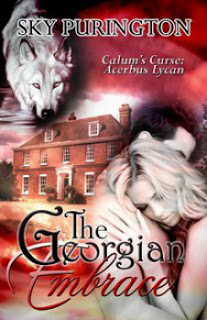 Is it true love...or is the allure just another dimension of the Georgian's embrace?

Paranormal investigator, Devin O'Rourke, is drawn to Isabel the moment he sees her ghostly image in a picture. While searching for proof of her existence, Devin finds himself in another time, danger lurking around every corner.

A woman in need of saving...

Eighteenth century, Isabel Savol, is on the run. With help from a friend, good fortune finds her sheltered and managing the construction of a house. When a handsome Irishman appears on her Georgian's worksite one day, everything she thought she understood about reality vanishes.

Untapped desire ignites between Devin and Isabel as they struggle to stay one step ahead of the time-warping house caught in Calum's Curse and the werewolf determined to finish the legacy it began.
-Goodreads

My Thoughts
Having been introduced to Devin as the light-hearted tender day to Leathan's intense and brooding night in Victorian Lure; I was tickled pink to get the chance to read him in his own story by way of Georgian Embrace.
Just as in Victorian Lure, the setting involves a beautiful home, shifting time periods, a mysterious and beautiful woman but...
unlike Leathan's story, instead of a vamp there is a baddie of a furrier sort after Isabel.

That's right people.  This one's for the werewolf  lovers.

Once again Sky Purington manages to transport readers through time and space with her imaginative sojourns through the looking glass and in to the world of Romantic Fantasy.  Having read the first of her offerings in this series, I have had to revise my labeling of her work as Paranormal Romance.
The reason for this being that the characters that this author pens are reminiscent of the fairytales  of childhood in tone and setting, though the content is clearly adult.

Ever the romantic, Devin finds himself on the hunt for the beautiful Isabel after she appears to him in a photo.
After searching for her, he finds her (or should I say her ghost) in the house that his cousin Andrea just bought.
That is when things really start to get interesting.  I can't give too much away, but let me just say that I thought that the romance between Leathan and Dekota was hot, but they have nothing on Devin and Isabel.
This story makes it really clear who the dark horse and the white knight are and it is very easy to pick a side, whereas in Victorian Lure the playing field was a little muddy and you had to wait things out a bit to to see who was who.
There is also a lot more magic in this story compliments of wizards and warlocks.
That's right, everything I said before and magic too.

I am curious to know if Andrea is going to get her own book in the series.  She has been in the first two books and I would love to see a tale woven around her.

A Little About the Authoress 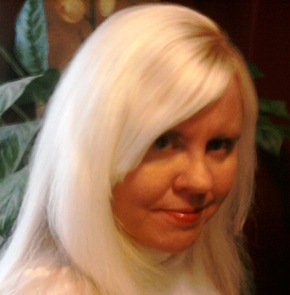 Best-selling author, Sky Purington lives in southern New Hampshire with her son and husband. The written word has been her obsession from the very beginning. Purington writes time-travel paranormal/fantasy romance heavily influenced by history.

From Irish Druids to Scottish Highlanders many of her novels possess strong Celtic elements. More recently, her vampire stories take the reader to medieval England and ancient Italy.

Enjoy strictly paranormal romance? Sky's latest novels follow three haunted houses in New England and the sexy ghost hunters determined to make sense of them. Make no mistake, in each and every tale told you'll travel back to another time and revisit the romanticism history holds at its heart.

Sky loves to hear from readers and can be contacted at Sky@SkyPurington.com Interested in keeping up with Sky's latest news and releases? Visit Sky's Website, www.skypurington.com to download her FREE App on iTunes and Android.