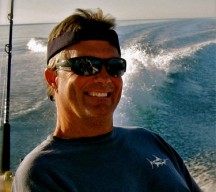 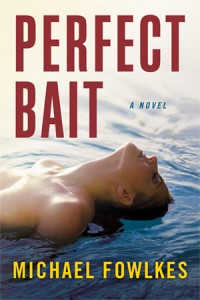 The Richly-Textured Settings of Seattle’s commercial waterfront, San Diego’s topless beaches, and the breathtaking waters off Cabo San Lucas create the backdrop for a riveting story of kidnapping, rape, and murder.
Born and raised in Seattle, Corey Phillips is new to Southern California, but with his devoted and beautiful girlfriend Jennifer by his side, their boat “Vintage” has become one of the top charter operations in the area.
However, not all those seeking trips offshore are looking for fish. Young girls are disappearing. Local authorities hope the FBI can put the pieces together, but nothing fits—until Corey and Jennifer become the perfect bait and find themselves in a fight for their lives.

Micheal on Writing and Inspiration

Michael how long have you been producing Inside Sport-fishing?

This will be our twenty-fourth season. We’re the longest-running highest rated
fishing show in Fox Sports history.

That’s got to make your proud?

Absolutely. If shows last a decade they’re considered a hit series. The fact
that we’ve been on for so long is pretty amazing.

What do you think has made the show so successful?

I think its mainly because the show has always been about the love of the
sport. Its never been a personality driven show, it’s always been about the
passion - the excitement - the thrill of the catch. Plus we’ve always
promoted CPR - Catch, Photograph and Release. I think the combination
of focusing on and showing how exciting and challenging fishing can be
while emphasizing respect for the fish, the oceans - the streams - lakes
whatever body of water we’re fishing just feels right to people.
Shifting gears, what made you decide to write a book?
Do you want the condensed version or the full blown story?

I grew up fishing back east. Some of my fondest childhood memories are
the times I spent fishing with my Grandfather and my Dad - sometimes the
entire family would go. Those memories are almost as vivid today as they
were when they actually happened. I’ve been fishing for as long as I can
remember. I was nine when we moved to California and that’s all I did was
fish - until I discovered girls - then it all changed. Forgot all about fishing
for awhile but as I got older I got back into it. I’ll never forget the day I was
driving home from work on the freeway - stuck in rush hour traffic - staring
wheel high at a big rig next to me - thinking is this how I want to spend the
rest of my life?

Obviously the answer was no.

You’re right. I worked as a deck hand on the sport-boats right up until I
started high school and always dreamed of running my own charter boat
and it was at that moment - stuck in traffic - I decided that’s what I wanted
to do. So I did it. Basically quit my day job - bought a boat - got my
Captain’s license and started a little charter business in San Diego. Didn’t
have a clue what I was getting myself into - but I didn’t care - I was living
my dream. I actually slept seven nights over the next seven months in my
own bed at home - the rest of the time was spent working on the boat -
getting her ready to charter. It was on only my second charter that we had
a horrible incident. A man fell overboard during the middle of the night - in
a storm - while we were running full-rack to the grounds. I remember years
of my life ticking away when I realized what had happened. It was rougher
than crap - raining - no moon - nothing but violent seas. Later the Coast
Guard said it was a one in a million rescue. I wrote an article about what
happened for a fishing magazine and eventually that incident became the
seed that inspired the novel.

So Perfect Bait really is a true life adventure?

No. Not really. The story has a lot of very real elements but its definitely
fiction. They say, write about what you know. So I gave it a shot.

I’ve read it and you definitely know your stuff.

Thanks. Like I said, a lot of the story was based on real life experiences.
I’d never written a novel before and again didn’t have a clue what I was
getting myself into but once I started I couldn’t stop.

How long did it take you to write it?

Five years to complete the first draft and then another couple working on
the re-writes. I was working full time producing the show - so the only free
time I had to write was when we were on flights going to and from locations
or at night. It would sometimes be months between writing sessions, but
the coolest thing was, as soon as I opened my lap top to start working on it
again, it was if I’d never stopped writing. My fingers could hardly keep up
with the story. It was like it was inside me - dying to come out. It was a
pretty amazing experience. I had no idea what was going to happen next -
no outline - no storyline - just characters that I believed in and felt if they
stayed true to themselves would make for a good read.

I have to tell you, its one of the best books I’ve ever read.

Thanks again. I really appreciate hearing that. It means a lot to me.

Thank you for taking time to do this interview.

This promotional stop is brought to you in cooperation with: