I'm A Reader Not A Writer Book Tours Presents: A Hard Act To Follow A Hard Act to Follow," is a non-fiction literary account of Henry Bushkin's tenure as Johnny Carson's lawyer, business partner, and friend. The book gives genuine insight into the 'Carson behind Johnny' with candid personal vignettes about the two, during the rollicking years when Johnny was the undisputed king of television. This is an engaging, eye-opening, anecdote-packed story about a young lawyer and his client, one of the biggest celebrities in the country. This funny, unfiltered account gives readers a look at the Johnny Carson that none but a select few really knew.  -Goodreads

My Thoughts
Johnny Carson made his home in the hearts and minds of millions by entertaining us for years with his sharp wit, gift of gab, and infallible comedic timing.  With the publication of "A Hard Act to Follow", Henry Bushkin brings Johnny Carson the man into sharp relief.  We see him as the son, craving attention and approval denied.  The shark-like businessman doing whatever it takes to maintain his  hard won fame and fortune.  The husband and father who, though loved by millions in his professional life, is never truly able to find or give that love in his personal one.

This book is a very balanced accounting of Carson's life as experienced, by his attorney, friend, and confidant Henry Bushkin.  While Henry is the first to acknowledge the great heights of personal accomplishment in both his and Mr. Carson's lives; he manages to convey the lows with a grace and candor that touches both the hearts and minds of readers.
This is a memoir that this reviewer, as one who
grew up with Johnny's monologs as her lullabyes; feels is in itself "a hard act to follow."

So with all of this as backdrop, I was more than a little astonished when over dinner Johnny said to me, “I think Joanna is the one.” It took me several beats to absorb this news until I finally pointed out, perhaps a little stupidly, “You’re still married to Joanne. And the way the divorce is going, it will be at least a year before you’re not married to her.” I had no interest in standing in the way of Joanna per se, but I knew that if the relationship became public, it was going to cost Johnny a vastly larger sum to free himself from Joanne. But, as I was to discover so many times, the ironclad realities I feared mattered nothing to Johnny Carson when there was something he wanted. “Please just get it done. No more meetings on the subject. Give Joanne what she wants and end it.”
From my point of view, the proceedings should have ended long ago. Joanne had been caught in an adulterous relationship. That was grounds for divorce. There were no custody issues. There was property to divide, alimony to negotiate, but she was a young woman who had a somewhat successful television career and had previously been an airline stewardess; it should have been an easy settlement. But it wasn’t. Raoul Felder, defining his style as a matrimonial litigator, was intransigent, and Joanne, unfortunately, was hysterical. She phoned Johnny and harangued him, and then phoned me and harangued me. She showed up at NBC in an inebriated condition to annoy and provoke him. It got to the point where we had to move for restraining orders.
Sometimes her behavior made me feel that I was in beyond my depth. Once I sought the advice of the great lawyer Louis Nizer, who had briefly represented Carson, as well as Charlie Chaplin, Salvador Dali, and many other famous clients. I was happy I did; he was the Yoda I had been hoping for.
“Nothing is more bitter than litigation between husbands and wives,’’ he told me.“The nastiness and anger exceed that of any other relationship. Don’t get caught up in it. Leave all the emotions to the psychiatrists. Focus on creating an equitable settlement.’’ It was very sound advice; even more flattering, Nizer called me a few weeks later to see if I would be interested in joining his firm. I wasn’t.
The turning point came when Joanne, for whatever reason, re- placed the militant Felder with the even-keeled, highly professional MortonBass. Once he got involved, the case resolved itself. We agreed that Joanne would receive the sum of $6,000 per month until she re- married or until Johnny’s death (which she did, until Johnny died in 2005), as well as a pretty nice little art collection. It was a fair settlement, but given the millions Johnny was earning at the time, I think I did a damn good job for him.
The case did not end without a further outburst. On the very day in June 1972 when the divorce settlement was to be put on the record at the Supreme Court in the Bronx, Joanne fired Bass and introduced her new attorney. The judge would have none of it, and made it clear that if she did not approve the settlement, there would be severe repercussions. Joanne came to her senses long enough to recant, and the settlement was approved. As part of the deal, Carson had agreed to pay Bass $35,000 for his fees. I gave him the check at the courthouse once the settlement was approved.

Praise for the Book

"I loved the book." ~Wayne Newton

"Henry was Johnny's closest friend for many years which becomes clear through many of the wonderful chapters of the book." ~Bob Trapenberg

"The book is full of tough love, humor, cultural history, sadness, humor, love, loss, well I guess I am saying it is full of life." ~Rupert Garcia


" Henry's portrayal of Johnny was spot on. I highly recommend this book which is the closest the reader will ever get to know the real Carson." ~ Ed Weinberger, former Tonight Show writer and Producer for Carson Productions

"A beautifully easy read that pulls you in to an effortless journey through Johnny Carson’s effortful life. The glamour  the fellow celebrities behind the curtain, the loyalties, and the betrayals. It certainly provides new insight on decisions and the lives that are behind the scenes." ~Kathy Davis, Kathy Takes on Books

""I have read this book and it is FAB! If you love reading about celebrities, this is awesome. It is also a great memoir as well. I am a huge memoir fan so this one was a real treat and one of the best I have read in this genre in a long time" ~Mary,  Bookhounds Blog

"Bushkin's easy, unpretentious style allows the reader to be a fly on the wall as this inside story plays out in the rarified air on which Johnny thrived. "A HARD ACT TO FOLLOW" is a must read whether you grew up on Johnny or never heard of him. And then there are the supporting characters -- from the Rat Pack to Johnny's Ice Queen mother ranging around the pages disturbing the peace. I read it straight through in 90 minutes and was left wanting more."  ~Sandy Ignon, Screenwriter (RANSOM).

"The tales are epic in nature and stretch from the first page to the last. “A Hard Act to Follow” is an honest appraisal of Carson and shows his dark side. In this, Bushkin strikes the right blend of salacious detail with an appropriate dose of discretion. Sure, you’ll learn more detail about Carson’s marriages-- in a tasteful way.  Bushkin will leave you wanting more. Great books will do that." ~Barry Mordis, Senior VP at Merryl-Lynch

"No one would describe Johnny as easy going-there was an edge to him that Bushkin always managed to soften. He continues to do that in this book. There was that challenging side of Johnny which is also captured in the book. Henry was Johnny's closest friend for many years which becomes clear through many of the wonderful chapters of the book. All in all a great book to read." ~Bob Trapenberg, Johnny's former Tennis Pro. 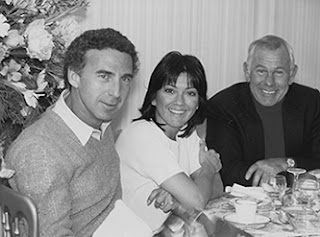 Henry Bushkin is an experienced lawyer who practices in both California and New York. He currently lives in Los Angeles where his children also reside.

Open only to those who can legally enter, receive and use an Amazon.com Gift Code or Paypal Cash. Winning Entry will be verified prior to prize being awarded. No purchase necessary. You must be 18 or older to enter or have your parent enter for you. The winner will be chosen by rafflecopter and announced here as well as emailed and will have 48 hours to respond or a new winner will be chosen. This giveaway is in no way associated with Facebook, Twitter, Rafflecopter or any other entity unless otherwise specified. The number of eligible entries received determines the odds of winning. VOID WHERE PROHIBITED BY LAW.

Email ThisBlogThis!Share to TwitterShare to FacebookShare to Pinterest
Labels: 5 Stars, B, I'm A Reader Not A Writer Tour