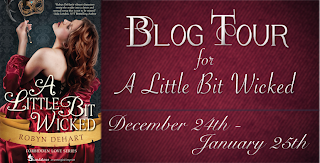 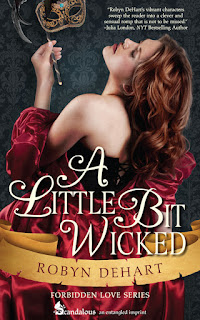 Marcus Kincaid has returned to England after a ten-year absence. His older brother died during that time, making Marcus the Earl of Ashford. Not only that, his younger sister is embroiled in a potential scandal that could ruin her chance at marriage. His aunt has already called in reinforcements—The Paragon.
Vivian March is known simply as The Paragon. She moves through every circle within Society, smoothing out scandals and stopping gossip in its tracks. Everyone in London knows that if she aligns herself with you, Society will forgive you your sins. What they don’t know is that she uses their secrets to cover her own jaded past.
But with every kiss and every touch that Marcus thrusts upon her, Vivian comes to believe life is infinitely more fun when you can be just a little bit wicked…


And now...a few words from our author about A LITTLE BIT WICKED!

What was your inspiration for A LITTLE BIT WICKED?

Really it all started with a line of dialogue that popped into my head, "My name is Vivian March and I am the Paragon." I was so intrigued by that and it started me on a line of questions and things just kind of snowballed from that. I started thinking about why she would be called that, if she came up with the name or if it was given to her. Was she really a paragon? What kinds of scandals did she deal with? And then I got to who is her worst nightmare? For Vivian it was Marcus, a man slightly from her past, but one that made her want things she didn't think she could have.

Did you plan to write Vivian March as an older character or was that just the way that she evolved as the novel took shape?

No, I knew she was going to be older. I actually borrowed that from another book I wrote that will never sell. I really loved those characters and the dynamic between the two with her being older. And it fit so well with these characters and set up the Forbidden Love series. I wanted to capitalize on those taboo kinds of relationships and having an older woman/younger man was a great place to start.

Have you ever been to England? If not do you plan to go.

If so, where were some of you favorite places?

I have, but it's been more than 10 years now. I went when I was still in college and while I knew I wanted to write historical romance, I hadn't settled on a time period and I didn't really know what to look for. I did the best "researching" while I was there, but I desperately want to go back. As for my favorite places. I LOVED Warwick Castle, it's everything I'd ever imagined a castle would be. Canterbury was also lovely. I really just loved it all. It's still my favorite vacation I've ever taken. Please don't tell my husband that though. :-)

Will we hear more from Marcus and Vivian in later reads?

If not...Do you have books coming out in the same vein?

Yes, book two, A Little Bit Sinful comes out in March (I think) and is about Marcus's younger sister, Clarissa and Justin Rodale, the gaming hell owner that she just can't seem to stay away from. Marcus and Vivian are in that book as well.

Thanks so much for having me!

WTF Are You Reading would like to thank
authoress extraordinare
Robyn Dehart
and
Entangled Publishing
for the opportunity to share
this 5 star romance with the
world!

I’m one of those writers who always knew that she wanted to be a writer. It took me a while, however, to figure out precisely what I wanted to write. Reading Kathleen Woodiwiss’ ”A Rose in Winter” sealed the deal for me and I’ve been reading and writing romance ever since. I should have known I was destined for this when my Barbies insisted on hosting elaborate masquerade parties, complete with stolen kisses in the moonlight.
I’m the youngest of three children, so of course I’m the favorite. I was raised in central Texas, in the beautiful Hill Country, right smack-dab between Austin and San Antonio. My parents were high school sweethearts and married a week after my mother graduated – they both needed their parents’ permission to marry since they were so young. So I blame them and their amazing marriage for the fact that I’m a hopeless romantic.
Somewhere along the line, I graduated from college with a degree in Sociology, only after completing an internship with none other than award-winning best-selling author, Pamela Morsi. It was one of the coolest experiences of my life and I learned more about the writing business than I could have hoped.
After college I worked a myriad of jobs: Computer Software Trainer, Recruiter, Administrative Assistant. But no matter what my day job, I come home to my real job and click, click, click away on my computer and get lost in my imaginary world where justice always prevails and the girl always gets her guy! It’s the coolest job in the world.
I’m married to the most amazingly supportive man. He’s so proud of my career, and loves to tell people, “My wife is a romance novelist.” We live in the Austin area, where my husband is a university professor. He’s ridiculously smart, but remains goofy enough to make me laugh every day. We’re the parents of two beautiful and precocious little girls who keep me quite busy during the day. We also have two very spoiled cats who are of no help at all when it comes to my writing, although they sometimes nap in the same room where I sit diligently working.
I’ve published seven historicals, all of which have received great reviews and a handful of them have won awards. I love to hear from readers,
so feel free to send me an email or you can find me online at The Sisterhood of the Jaunty Quills, or, Peanut Butter on the Keyboard, my newest blogging endeavor that’s all about writing moms or moms who write. You can also find me on my Facebook or my Facebook Author page and on Twitter. I’m everywhere!

Thanks again for visiting my stop on A LITTLE BIT WICKED tour.
To see other posts in the tour or for more information about Robyn or Entangled Publishing
Please follow this link:
http://www.entangledinromance.com/2012/12/27/a-little-bit-wicked-blog-tour/