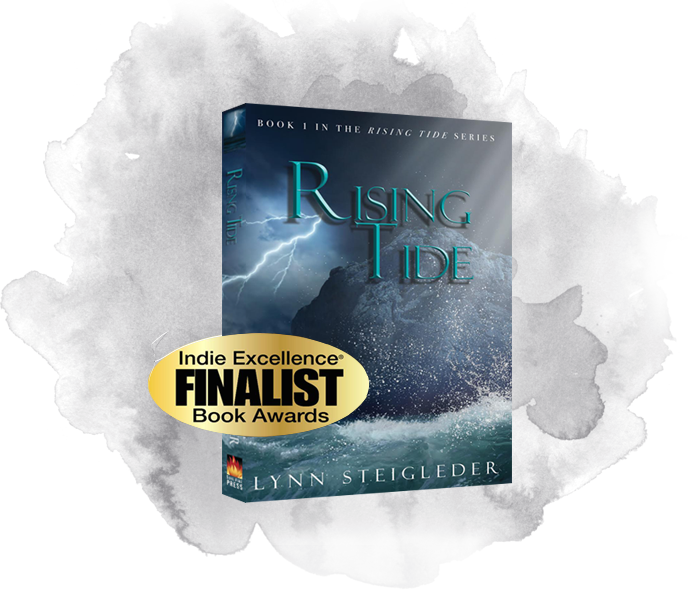 Thanks for following us over to our subsitue home while we work out getting the Contessa at the Crossroads restored.  I hope that you love this book as much as I did as well as my book club.  It was a must read!

Publication Date: April 28, 2009
Another blast ripped through the Orion, cutting all power and knocking him to the floor. Ben lifted himself off the deck and found it was impossible to stand. He crawled to the COM panel. Marty! All systems down! All systems down! With a category six hurricane above and his habitat below destroyed by the blast, Ben finds himself alone in a decompression chamber. Suddenly he receives a mysterious message. Dash, dash, dot, dot, dot, a seven. S.E.E.K.C.7. Is he dreaming, or is someone trying to reach him? In Rising Tide author Lynn Steigleder depicts a world in which land is at a premium due to the advancing sea, and where mans attempt to adapt has led to a decay of morality and survival of the fittest. In the midst of the ocean, a crew of criminally minded profiteers rescues a stranded diver, Ben Adams. Is the rescue just a fortunate coincidence for Ben, or has he been led to this rendezvous with fate for a common goal? Rising Tide is a novel of rebirth for a world corrupted by evil.

Lynn Kevin Steigleder was born in Henrico County, Virginia. Raised in the suburbs of Richmond, Virginia, Lynn spent most of his adult life as a supervisor in the field of construction and fabrication. When Lynn's department was outsourced in 2007 within two months of his diagnosis of multiple sclerosis, he realized he needed to transition into a new career path due to his energy and mobility challenges.

Having dabbled in writing short stories for his own entertainment, his son challenged him to consider writing as a career. He accepted the challenge and quickly found he had a flair for creative writing that incorporated fantasy, science fiction, mystery, and adventure. His first novel, Rising Tide, was accepted for publication and released in 2009. Now working on the draft of his fourth book of the Rising Tide series, Lynn has the second and third books ready to submit for publication.

Recently, Lynn was a finalist in the Indie National Book Award Contest.

Lynn currently lives in rural Virginia, with his wife, Donna. They have three grown children who reside in the area.