Will You Feel the Pull of "Undercurrent" In this suspenseful teen thriller with a touch of the otherworldly, perfect for fans of Neal Shusterman, a boy goes over a waterfall and wakes up to find himself in a twisted version of the life he knew
A shadowy figure. An intense roar. The sensation of falling—fast.

That’s all Callum Harris remembers from his tumble over the waterfall. But when he wakes up in a hospital bed and finds his best friend trying to kill him, Callum knows something is seriously wrong. Unfortunately for him, the mysteries are just getting started.

Why are his parents acting like he’s some big sports star all of a sudden? And why are all the buildings in town more run-down than Callum remembers? Worst of all...what happened to Callum’s brother? Either Callum has gone seriously crazy or something happened when he went over the falls. Something impossible. Callum needs answers, and now. Because in this twisted new version of the life Callum knew, his former best friend isn’t the only one who wants to see him dead.

Filled with mind-bending suspense and unsettling thrills, Undercurrent is a grippingly paced teen debut that will pull you under and never let go.  -Godreads

My Thoughts
This book is an attention grabber from the opening page.  Callum Harris awakes from a coma to a life that everyone fits into but him.  Readers get to fall in love with the serious and thoughtful young man who's life has completely changed, and as a result of this change, could soon end.

Things This Book Does Well
1.  Callum's character development
2.  Callum's backstory
3.  Callum's journey through the confusion that is his new life.
4.  Drama

Things This Book Does NOT Do Well
1.  Supporting character detail and/or effective relationship building between Callum and him/her.
2.  Rush ending

The story of Callum's new life and how he does or doesn't deal with the ways in which it has changed remains consistent until the last 4 chapters of the book.  This is the point at which the plot resolution begins and the plot cohesion ends.
The story that has been so lovingly crafted for so many pages is rushed to a conclusion.  The questions that both the character and the reader have about how Callum got the life that he has now only having been skimmed, and answered just enough to arrive at a feasible ending. 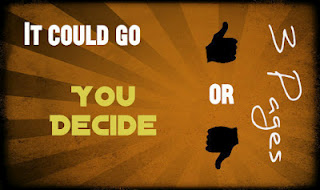 This is a good story for the most part.  The book is easy to follow, and provides a fast and interesting read.

Email ThisBlogThis!Share to TwitterShare to FacebookShare to Pinterest
Labels: 3 Stars, B