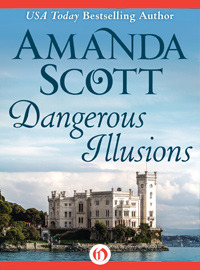 The first book in Amanda Scott’s acclaimed Dangerous series journeys from the battlefields of Waterloo to the ballrooms and boudoirs of London, where a deadly deception unfolds . . .

Engaged by proxy to a man she’s never met, Lady Daintry Tarrant is dismayed when the war hero returns, introducing himself as her fiancé, Lord Penthorpe. She cherishes her independence and has turned away many suitors, but this one she must marry. Penthorpe is completely captivated by Lady Daintry—but he’s not who he claims to be. Penthorpe and Lord Gideon Deverill fought together at the battle of Waterloo, and when Penthorpe fell, Gideon assumed his identity in order to see the beautiful Lady Daintry. Gideon knows there’s bad blood between Lady Daintry’s family and his own, but he’s smitten with Daintry and determined to reunite the bitterly feuding clans. When a ghost from Gideon’s past appears, he could lose everything—including Daintry’s love.

My Thoughts
Lady Daintry Tarrant is a very independent young woman at a time when that is frowned upon in young women.  Unlike most young ladies of her era however, she has the support of her spinster aunt, Olivia in maintaining her freedom.
Until...
The mysterious Lord Penthrope returns from war to claim his proxy bride.

This book is so well-written that the injustices endured by the woman of this time are enough to inspire ire in the modern reader.
The mystery of Gideon and how he comes to know and love Lady Daintry is fun to read.  Along with the rather Shakespearean (as in Romeo and Juliet) tale involving the history of the feuding families.

This is a book that makes one think about how far women have come, exposing the dirty underskirts of a much romanticized time period.
As is often the case with Amanda Scott novels, this is not a fluffy, stylized romance.
What readers have in this novel is a historical novel, filled with well written characters, thought provoking plots, and emotionally charged scenes.
Welcome to the world of the thinking reader's romance!

Amanda is a fourth-generation Californian, who was born and raised in Salinas and graduated with a Bachelor’s Degree in history from Mills College in Oakland. She did graduate work at the University of North Carolina at Chapel Hill, specializing in British History, before obtaining her Master’s in History from California State University at San Jose. She now lives with her husband and son in northern California.

As a child, Amanda Scott was a model for O’Connor Moffatt in San Francisco (now Macy’s). She was also a Sputnik child, one of those selected after the satellite went up for one of California’s first programs for gifted children. She remained in that program through high school. After graduate school, she taught for the Salinas City School District for three years before marrying her husband, who was then a captain in the Air Force. They lived in Honolulu for a year, then in Papillion, Nebraska, for seven. Their son was born in Nebraska. They have lived in northern California since 1980.

Scott grew up in a family of lawyers, and is descended from a long line of them. Her father was a three-term District Attorney of Monterey County before his death in 1955 at age 36. Her grandfather was City Attorney of Salinas for 36 years after serving two terms as District Attorney, and two of her ancestors were State Supreme Court Justices (one in Missouri, the other the first Supreme Court Justice for the State of Arkansas). One brother, having carried on the Scott tradition in the Monterey County DA’s office, is now a judge. The other is an electrician in Knoxville, TN, and her sister is a teacher in the Sacramento area.

The women of Amanda Scott’s family have been no less successful than the men. Her mother was a child actress known as Baby Lowell, who performed all over the west coast and in Hollywood movies, and then was a dancer with the San Francisco Opera Ballet until her marriage. Her mother’s sister, Loretta Lowell, was also a child actress. She performed in the Our Gang comedies and in several Loretta Young movies before becoming one of the first women in the US Air Force. Scott's paternal grandmother was active in local and State politics and served as president of the California State PTA, and her maternal grandmother was a teacher (and stage mother) before working for Monterey County. The place of women in Scott’s family has always been a strong one. Though they married strong men, the women have, for generations, been well educated and encouraged to succeed at whatever they chose to do.

Amanda Scott’s first book was OMAHA CITY ARCHITECTURE, a coffee-table photo essay on the historical architecture of Omaha, written for Landmarks, Inc. under her married name as a Junior League project. Others took the photos; she did the research and wrote the text on an old Smith-Corona portable electric. She sold her first novel, THE FUGITIVE HEIRESS—likewise written on the battered Smith-Corona in 1980. Since then, she has sold many more books, but since the second one she has used a word processor and computer. Twenty-five of her novels are set in the English Regency period (1810-1820). Others are set in 15th-century England and 14th- through 18th-century Scotland, and three are contemporary romances. Many of her titles are currently available at bookstores and online.