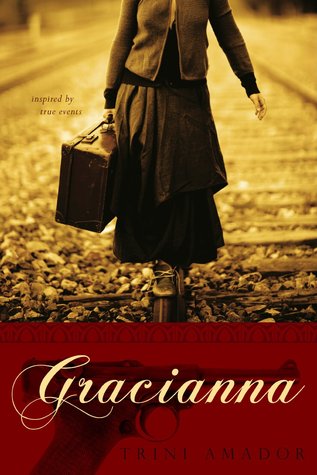 The gripping story of Gracianna--a French-Basque girl forced to make impossible decisions after being recruited into the French Resistance in Nazi-occupied Paris.

Gracianna is inspired by true events in the life of Trini Amador's great-grandmother, Gracianna Lasaga. As an adult, Amador was haunted by the vivid memory of finding a loaded German Luger tucked away in a nightstand while wandering his great-grandmother's home in Southern California. He was only four years old at the time, but the memory remained and he knew he had to explore the story behind the gun.

Decades later, Amador would delve into the remarkable odyssey of his Gracianna's past, a road that led him to an incredible surprise. In Gracianna, Amador weaves fact and fiction to tell his great-grandmother's story.

Gracianna bravely sets off to Paris in the early 1940s--on her way to America, she hopes--but is soon swept into the escalation of the war and the Nazi occupation of Paris. After chilling life-and-death struggles, she discovers that her missing sister has surfaced as a laborer in Auschwitz. When she finds an opportunity to fight back against the Nazis to try to free her sister, she takes it--even if it means using lethal force.

As Amador tells the imagined story of how his great-grandmother risked it all, he delivers richly drawn characters and a heart-wrenching page-turner that readers won't soon forget.

“Gracianna is a riveting and remarkable narrative. The characters come alive through their unassuming but compelling stories, as Nazi-occupied Paris unfolds before our eyes. We come to care deeply about the characters, which makes putting down the book almost impossible. Highly recommended.” – Stacey Katz Bourns, Director of Language Programs, Dept. of Romance Languages and Literatures, Harvard University

“While wine is obviously a significant part of life’s enjoyment, the story behind the wine can be even more gratifying. You will be fixated on this thrilling story written by Trini Amador which was inspired by Gracianna, his great-grandmother, the French Basque namesake of his family’s award-winning winery in Sonoma County.” – Bob Cabral, Director of Winemaking & General Manager, Williams Selyem Winery

“Gracianna is a gripping story about human courage and determination. This book truly deserves a movie because of the action and emotions in it. Trini Amador has done a fantastic job in bringing the story of his amazing grandmother to life. A must read for fiction and non-fiction lovers alike.” —Felipe Korzenny, Ph.D., Director of the Center for Hispanic Marketing Communication, Florida State University.

Gracianna is in a word and awesome read.  Author Trini Amador loving weaves threads of imaginative storytelling flare into the already captivating history of his grandmother.

Presented within a very readable 296 pages; Gracianna's story has all the heartbreak, love, loss, tests of will and triumphs of spirit needed to bring a tear to the eye and inspiration to the heart of any reader.

Set during the turbulent times of the German occupation, Gracianna tells the story of a young woman torn between her dreams of a new life in America, and her desire to free her sister from the horrors of Auschwitz.
Determined to do what she must for the love of her younger sister, Gracianna sets her life on a perilous course that has to be read to be believed.

This first work from Trini Amador, is a true jewel in my collection and the story of his grandmother, one that I shall treasure always.

Trini Amador vividly remembers the day he found a loaded German Luger tucked away in a nightstand while wandering through his great-grandmother’s home in Southern California. He was only four years old at the time, but the memory remained and he knew he had to explore the story behind the gun. This experience sparked a journey towards Gracianna, Amador’s debut novel, inspired by true events and weaving reality with imagination. It’s a tale drawing from real-life family experiences.

Mr. Amador is a traveled global marketing “insighter.” He is a sought-after guru teaching multinational brand marketers to understand how customer and consumer segments behave based on their needs, values, motivations, feeling and values. He has trained over five thousand brand marketers on how to grow brands in over 20 countries in the last 15 years. His counseling has been valued at global brands including General Electric, Microsoft, AT&T, Yahoo!, Sun Microsystems, Google, Jack Daniel’s, The J.M. Smucker Co., DuPont, Mattel, and Rodale, Inc..

Amador is also a founding partner with his wife and children of Gracianna Winery, an award-winning winery located in Healdsburg, California. The winery also pays tribute to the Amador Family’s maternal grandmother, Gracianna Lasaga. Her message of being thankful lives on through them. The Gracianna winery strives to keep Gracianna’s gratitude alive through their wine. Learn more at: www.gracianna.com, like Gracianna Winery on Facebook or follow them on Twitter @GraciannaWinery.
Amador resides in Sonoma County with his family.