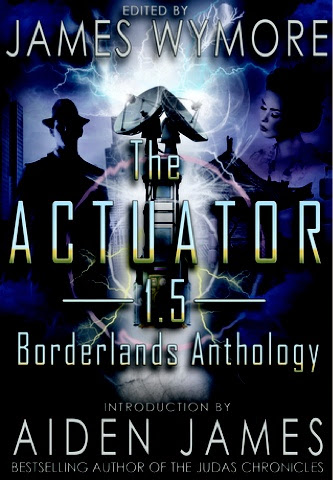 When the Actuator breaks the earth into a patchwork of altered realities, the remaining Machine Monks begin looking for the Keys to put it back. In the meantime, everyone in the world has been transformed without knowing why. This collection tells about some of the people struggling to deal with the change.

In “Remembering Emily,” Sara Wolf brings us a tale describing the horror of a world split by the Actuator. Daniel’s girlfriend, Emily, is in danger in some faraway place. Worse, she might forget Daniel before he can reach her. Fighting against the Actuator’s attempts to enforce a new reality to block him, he must find a way to rescue Emily before it’s too late.

Matthew Cox explores Cyberpunked China in "Stolen Orchid,” where a man finds his wife has become a ghost due to the Actuator's powerful reach. His only hope of saving her is to cross the border with a mobster bearing down, facing precarious fate in an unfamiliar realm.

In “The Blackbird’s Tale,” Dan Willis relates the plight of a Machine Monk named David, who works his way through obstacles to reach Chicago. Why? To find an Actuator Key—one that takes the form of a small bird statue.

Nathan Yocum explores the plight of Oren Smith Wessely as a man with no past, trapped in the twisted, kaleidoscopic realm of steampunk Arizona in “Dream Journal.” Dark dreams haunt Oren’s nights…but what happens when those dreams suddenly come to life? Certainly nothing good.

Mara Valderran’s “The Austenation” is a tale where Pride and Prejudice meets werewolves in the English countryside of the Victorian era. Dealing with the strict social mores of the day, along with lycanthropic consequences, the story’s young heroine is forced to do what was often unthinkable in that era: take matters into her own hands.

In “Escape,” Patrick Burdine explores the fate of a group of teenagers caught in a town without mothers, and where all the fathers have turned into faceless, soul-sucking monsters. When one girl’s eighteenth birthday marks the end of her existence, can they penetrate the steel-walled town’s borders before it’s too late?

“The Ritual” is the tale brought to us by Whitney Trang, where the Actuator brings imagined horrors of a haunted house in Japan to life. A young woman’s quest means facing a ghost bent on sacrificing her sister in a ritual to save himself and his family.

“The Gatekeepers of Change” is James Pratt’s short chronicle about a man dressed in black, and who rises to importance after the Great Actuation. Suddenly aware of the great powers and wider universe now available to him, the man enacts his plans.

“The Ringer” is Craig Nybo’s tale about a detective in New Orleans facing zombies and other undead monsters as he assists a client in taking on her crime lord husband. The huge fee adds plenty of incentive…if he can live long enough to spend it.

A Soviet soldier guarding Chernobyl from people too foolish to stay away from the radiation forms the basis of Jason Purdy’s “Anna and Lena.” When the soldier abandons his post, he soon discovers that he is the last living person in the area. Poisoned and growing weaker by the moment, he must find someplace safe across the border before he perishes.

Jenny Persson brings us the story of a teen suddenly thrust into Viking Sweden in “Once upon a Frozen North.” The teen finds her modern way of thinking brings only misery. But the girl is cunning. Soon after her ritual into womanhood, she looks to the steampunk airships just across the border as a means for her escape.

Jay Wilburn takes us along the harrowing journey of drug addicted Travis, as he traverses the Actuator-ravaged American South in “Halfway.” The journey becomes an opportunity to reconnect with the people lost to him by addiction…. But in the end, will he find the lasting peace he seeks?

The author Juhi’s “The Search for Punarnav” takes us far away to India, where a man seeks to become a healer. To do so, he faces the daunting task of eluding the many dangerous Hindu mythological creatures brought to life by the Actuator.

Jason A. Anderson brings us “15 Seconds of Fame.” Unlike the title’s standard definition, this tale takes place in Steampunk London. A detective risks life and limb to save a child from her mob boss father. Not an easy task, especially when it means finding a way to also save the child’s mother from violent retaliation.

In “Forever Young,” Wilbert Stanton explores the fate of an old man who finds himself young again, after paying his life’s savings to gain admission into an exclusive realm. However, when he meets a new love, he soon learns the real cost of immortality, and whether or not he is willing to pay for it.

Last, but not least, we have James Wymore’s tale, “Cult of the Actuation.” A Machine Monk, captured just east of the base, calls for help. Dragon Star comes to the rescue… but is soon distracted by a religious cult surrounding the mouth of a cave near one of the Actuator’s borders. Ultimately, the cult leader decides that the Machine Monk and Dragon Star pose a threat, and orders their execution. A dicey situation at best.

My Thoughts
This wonderful anthology allows readers to travel to worlds ranging the imaginative spectrum.
There is something to be found for every reader.  From steampunk to historical.
Though the worlds may be different, the underlying theme of human sacrifice is a unifying thread which works to link the tales.
This is a surprising treasure trove of originality that will make a welcome addition to any library.
Posted by WTF Are You Reading