Skateboard Your Way To The Stuff Of Dreams In "Ramping Up" 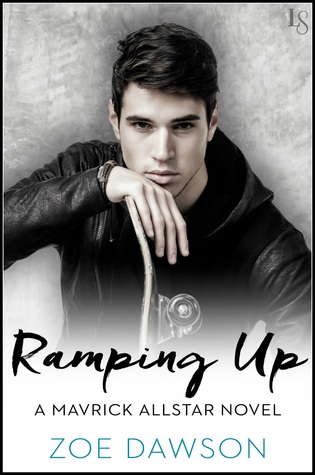 The world of extreme sports just got a little steamier! Zoe Dawson’s pulse-pounding, emotional series follows the wily young female agents of Mavrick Allstars as they chase their dreams—and meet the chiseled athletes who make them come true.

Helena “Lena” Mavrick is ready to prove that she can play with the big boys. Working at her father’s internationally renowned agency, Mavrick Allstars, Lena sets her sights on one of the most coveted phenoms out there: a twenty-four-year-old surfer caught ripping it in a viral skateboarding video. Signing him would be a huge win—and his marketing appeal isn’t the only thing that makes Lena’s heart skip a beat. Trouble is, fraternizing with the client is against company policy.

Professional surfer Gunner Smith lives under the absolute control of his coach—until he takes the ultimate risk and starts over as a skateboarder. Gunner swore he wouldn’t give up his freedom again, but Lena’s out-of-the-blue offer makes him think long and hard. She’s smart, she’s bold, she’s got sponsors lined up around the corner—plus she’s drop-dead gorgeous. He’s just not sure his coach will let him get away that easily, because he’s not just Gunner’s coach, he’s also his father.

Gunner is used to hiding his tortured past. But when his steamy affair with Lena threatens their future, he must decide whether he will sacrifice everything for the woman who’s stolen his heart.  -Goodreads

Pro surfer, Gunner Smith, is tired.
Tired of the pressure to stay at the top of his game.
Tired of his father / coach's alcohol fueled rage.
Tired of the lies and manipulation of his scheming manager.
Tired of it all!

Little does he know that a night spent skateboarding with friends.  A night spent indulging in the one thing that sets him   free.  Will be the one night that will catapult him to the pinnacle of the extreme sporting world.  Putting him face to face with both his greatest dreams, and the one woman who could prove to be his deepest desire.

Ramping Up, the first title of the Maverick All-Stars series, introduces readers to the high stakes game of professional skateboarding. A sport where one wrong move can be your last.  While one right one can make you a star.

Because leading man, Gunner Smith, is written as such a down to earth guy, and because his rise to fame is as much of a surprise to him, as to the reader.  It is very easy to attach one's self to his emotional gravy train from the book's beginning.
When the back story involving his now strained relationship with his  afore mentioned domineering and abusive alcoholic father, and sleazy manger are taken into account.  Readers have no choice but to be sold.  Hook, line, and sinker.

The story really starts to get interesting however; when Helena “Lena” Mavrick enters the picture.  Daughter of the famed Noah Maverick, CEO and owner of Maverick All-Stars.  One of the most respected sports talent agencies in the world.
Helena is a woman with no illusions about her need to make her mark in what for so long has been solely both her father's business, and a man's world.

Eager to try her hand at shaping and molding what promises to be a stellar career for Gunner.  Helena is in no way prepared for the attraction that she feels for him.
An attraction that thankfully author, Zoe Dawson, allows her audience to explore very early in this book.
This is far from a case of sex ruling the day however.
Ms. Dawson is very careful to maintain a very healthy balance between sport, sex, and drama.

What readers are sure to become most enchanted with, in very short order.  Is the incredible amount of detail that Ms. Dawson puts into her representation of skateboarding.
Going so far as to include a glossary of terms at the back of the book.  She leaves no stone unturned in her effort to make  this story a truly visceral experience.

The romantic element here is first rate.  With each person giving the other just what they need.  The sex is both hot and tender.  But it's the chemistry that these two share outside of the bedroom that makes the pages sizzle.
The effort that these two put into trying to keep their relationship under wraps...clearly wasted.
Though an annoyance, to be sure.  Said "hide and hug" does very little to detract from the general appeal of their budding infatuation.

The thing about this awesome story that may give readers a bit of a pause?
The fact that certain aspects of both Gunner's character and his story read considerably younger  than his 24 years.
As such, there are quite a few times when his character becomes very hard to define in the reader's mind.  A distraction which works to keep this read just a breath away from perfection.

Ramping Up is an adrenaline filled, all access pass to what happens when a dream that you didn't know you were chasing, catches you.
Allowing you to find that one person who makes your heart strong enough to follow it.

Reviewer's Note:  Ramping Up is the first book in a series.  Because subsequent books have yet to be published.  I can not say with certainty, in what order it is to be read.

*I was provided was a review copy of this work in exchange for the unbiased review given.* Zoe Dawson, the author of 40+ books had always dreamed of becoming a full-time romance writer, and with determination, persistence, and a little luck that wish came true. Her other passions include traveling the world, owning a beach house (she believes she was a mermaid in another life), and seeing her books in movies. When she’s not writing, she’s painting or killing virtual MMORPG monsters in World of Warcraft. She lives in North Carolina with her two grown children and one small, furry gray cat.
Find Her:  Web / Twitter / Facebook / Goodreads