The Fires Of Emotion Burn Endlessly In "Scorch" 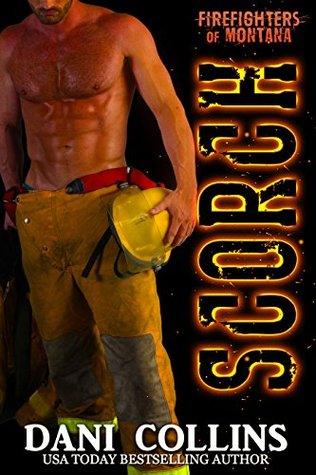 Jacqui Edwards is back in Glacier Creek to wrap up loose ends after the death of her husband, Russ, captain of a group of daring, talented smokejumpers. She wants to stay and reboot her life, but faces an uphill battle shedding the role of the captain’s fragile, grieving widow.
After growing up in foster care, Vin Kingston finally found a family when he joined the smokejumpers. Then, six months ago, his best friend and captain died in a freak jump accident right before his eyes. Vin is consumed with guilt and determined to watch over Russ’ widow. No easy task when the vibrant, beautiful Jacqui is busting out of her shell and challenging Vin’s vow to keep her off limits.  -Goodreads

That is just one of the questions that Vin Kingston and Jacqui Edwards are left to answer after the death of Captain Russ Edwards, in a horrific parachuting accident, leaves Jacqui without her husband and Vin without his best friend.

Scorch, the second offering of the Firefighters of Montana series. Allows readers a look inside the world of the Glacier Creek smoke jumping crew. A crew devastated by the tragic loss of their leader and friend.

But for the two people closest to him, Russ's death has meant so much more. More hurt, more grief, more loss, and more questions.

For Jacqui, losing Russ has meant that she has had to take a long hard look at her past. So that she might better equip herself to forge a new future.

For Vin, Russ's death and the gaping hole that it leaves in both his working and personal lives, is one that dredges up memories of his past. A past spent alone, abandoned, and searching for a family as a ward of the Foster Care system.
Finding himself once again on his own, and without the foundation that his relationship with Russ and Jacqui provided.
Vin is a man adrift.

Jacqui is by no means over the loss of her husband. But she is ready to get on with the business of living. Newly returned from time spent with her relatives in Florida.
Jacqui is pleased to find that she is more than ready to resume life in Glacier Creek. A life filled with the smoke jumpers, memories, and Vin.

What neither she, nor he had any way of knowing however,
was the effect that they each would or could have on the mind and heart of the other...and just what that could mean for them both.

Scorch is a book that forces readers to walk an emotional tight rope with its characters. Ever watchful for that one word, deed or thought that will be the proverbial straw to their camel.

For leading man, Vin, said straw just happens to be his attraction to leading lady, Jacqui. Making matters worse for our already overwrought Mr? The fact that Jacqui, his friend and the wife of the best friend that he lost. Is as attracted to him as he is to her. Leaving both parties to question where respect for what was, makes way for rebuilding toward what could be.

Making its home where emotions live and breathe, Scorch allowes readers to explore every emotion from the depths of grief, to the euphoric heights of newly kindled passion within the span of its mere 139 pages.

Reviewer's Note:  Scorch is the second novel in a closely related series.  Due to the fact that the stories in this series companion each other, it is not mandatory that they be read together or in order.
*This review of the above referenced literary work is based solely on the impartial opinions of the reviewer.  Said opinions have in no way been influenced by Tule Publishing or anyone acting on their behalf.

A USA Today Bestselling author, Dani Collins began writing in high school, spending more than two decades writing and submitting before she got The Call.


After a brilliant debut in the UK with No Longer Forbidden, a Mills & Boon Modern Book Of The Month in January 2013, Dani Collins saw her first Harlequin Presents, Proof Of Their Sin, win that year’s Reviewer’s Choice for First Series romance by Romantic Times Book Reviews.
Dani has gone on to sell more than two dozen sexy, witty, vibrant romances to a variety of worldwide publishers including Harlequin Mills & Boon in London, Tule Publishing in California, and Champagne Books in Alberta Canada. Dani has even published some indie books out of her office in rural British Columbia where she lives with her high school sweetheart.
While Dani’s settings span from glitzy Greek islands to small town Montana to imaginary medieval worlds, she always delivers alpha heroes squaring off with spirited heroines with passion and humor.
Try before you buy! Join Dani’s newsletter and receive Cruel Summer, a short story ebook written exclusively for her subscribers. Get Dani’s Free eBook