Loves Fires Are Not The Only Flames In "Smolder" 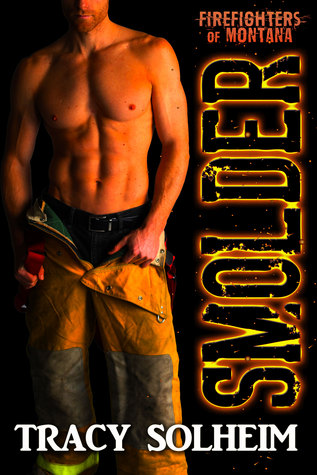 Former Army Ranger, Sam Gaskill, is starting over in Glacier Creek, Montana - far away from the plains of Texas and the memories of his late wife. Taking charge as the new captain of a squad of smoke jumpers should provide him with enough adrenaline to chase away the ghosts from his past. Until a sexy, green-eyed temptress with a sassy mouth enters the picture…

Laurel Keenan, champion horsewoman, couldn’t wait to escape her hometown. But instead, an ailing mother and an unplanned pregnancy landed the impetuous dreamer right back on her father’s ranch. Laurel has managed to lead a quiet life with her young son—until she sets eyes on the tough guy with the sexy ass.

Sam already failed one woman; he won’t trust his heart with another. And Laurel is determined not to risk her heart—or her son’s—on another thrill-seeker. Can their slow burn lead to a love that lasts?

My Thoughts
Starting over can be difficult under the best circumstances.  But when starting over means carrying the ghosts of a guilt ridden past into the precarious and uncharted territory of a tenuous future.  Forging bright and shiny new paths can be almost impossible.

Unless, of course, the man doing the impossible is former Army Ranger, Sam Gaskill.  Whether making himself at home in his new role as captain of a highly skilled smoke jumpers.  Or attempting to find a training facility for his late wife's beloved made.  Sam is a man determined to do his duty, and make things right for all concerned.  No matter the personal price.


Convinced that the thrill of fighting fires and saving lives will always be enough, Sam is completely unprepared for the effect that one bold, brash, and exceptionally beautiful horsewoman will have on his libedo. Or the restorative effect that time spent with her 5-year old son, will have on his battered soul.

At just under 150 pages, Smolder is a read that manages to pack a well paced, seamlessly crafted, and remarkably complex plot into quite a diminutive package.  Further sweeting the already delectable story pot, is a cast of instantaneously relatable characters, intelligent and naturally occurring character interaction, and a romance that balances passion's heat with emotional depth.

While the rapid fire pacing of this story does put Sam and leading lady Laurel's attraction at the story's forefront, right from the start.  The strong personalities of both our leading man, and his lady, make their frying pan to fire leap both an effortless and a natural one.

Not one to rest her story's success solely in the hands of fickle hearts.  Authoress, Tracy Solheim, gives readers healthy doses of action, suspense, and drama at every turn.  Clearly aware that 'the devil is in the details'.  Ms. Solheim's thorough descriptions of every aspect of both Sam and Laurel's working lives, gives readers that front row seat.  Thereby, elevating this book out of the realm of story, and into that of experience.

Not to be forgotten or outshone.  Young Tyson proves to be quite the effective touchstone for both emotional and dramatic aspects of the plot.
His youthful exuberance and openhearted innocence stand as both teacher and much needed balm to the jaded perspectives and wary hearts of his elders.

Reviewer's Note:  I was provided with a copy of the above referenced literary work in exchange for my honest review.

Tracy's creative writing career started in the fourth grade when she published her first book. It was a bestseller–mainly because her dad bought all ten copies. From there, she moved on to work for NBC Sports and then to writing reports and testimony for Congress.
Today, Tracy is the author of best selling contemporary romance novels featuring hot football players and the women who love them.
She lives in Georgia, with her husband, two nearly adult children, and a horse named after her first novel: Game On.
See what she's up to at www.tracysolheim.com.