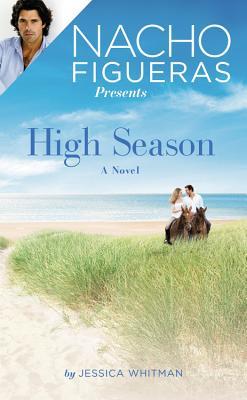 World-renowned polo player and global face of Ralph Lauren, Nacho Figueras dives into the world of scandal and seduction with a new fiction series set in the glamorous, treacherous world of high-stakes polo competition.

Georgia never wanted to be a jetsetter. A plain old country vet was fine for her. But one distress call from her best friend and the next thing she knows she's neck deep in the world of polo's most elite international players--complete with designer dresses, fine champagne and some of the most gorgeous thoroughbreds she's ever seen. Some of the most gorgeous men too...

Alejandro Del Campo needs his team to win the season's biggest polo tournament or else he's not sure how much longer they're going to be in business. What he doesn't need is some sassy new vet telling him how to run his business--and distracting him at every turn. But as they come closer and closer to the championship match, it soon becomes clear that Alejandro wants to win Georgia just as much as the tourney trophy. But can he ever convince her his world is where she truly belongs?

My Thoughts
International polo sensation and the face of Ralph Lauren, Nacho Figueras, ushers readers into a world where polo reigns and money rains.  A place where fortunes are won or lost to the beat of horse hooves, and refined manners give way to untamed hearts.

For Georgia Fellows, life has narrowed to days spent between helping her father treat the animals on their dilapidated family farm, and assisting the local village vet.  An excellent veterinarian in her own right; Georgia is fully aware that she should aspire to more.  But scars from her mother's abandonment of her and her father, when Georgia was just a teen, have yet to completely heal.  Leaving a very road wary woman in their wake.

Alejandro Del Campo is one of the reigning princes of polo.  As one of the heirs of the Del Campo polo dynasty, sporting the physique of a Latin Adonis, and captain of the champion polo team, La Victoria; he appears to have it all.
Appearances however, can sometimes be deceiving.
Never more so than in the case of Mr Del Campo.
Still riddled with guilt over the accidental death of his wife, Alejandro lives a life apart.  A life far removed from the natural passions that should fire his blood and heat his loins.  A life lived by a strict code of honor, responsibility, and duty.
His only freedom found on horseback.

Until one touch from a certain beautiful veterinarian, from a small town in upstate New York, gives 'the man who has everything' something to want.
Her!

Though this first novel in The Polo Season series is set in a world of utter opulence. Its author is careful to temper said grandeur with very down-to-earth and approachable characters, and a plot spotlighting the universal search of one heart for its corresponding beat.
In the case of Alejandro Del Campo and Georgia Fellows.  Theirs is a love which is both complimented and hampered by their love for the noble horses to whom they are both master and servant.

When what was as simple getaway to Florida compliments of her best friend Billy, turns into the opportunity of a lifetime for Georgia.  After her quick action and keen eye leads her to diagnose a hidden ailment in Alejandro's prized mare McKenzie.

The bounty that accompanies Georgia's new role as the Del Campo's number 2 vet, comes with quite the price.  The man that has stolen her her heart.  The undeniable intensity of their attraction to each other, when juxtaposed against their shared respect for decorum and duty, makes for a natural tension that makes the reader anticipate interaction between Georgia and Alejandro on even the most mundane levels.

You can rest assured however, that when these two forces of nature come together; the results will be earth-shattering.  The perfect blend of all things emotional and carnal.  The love scenes between Alejandro and his lady are the stuff of romantic dreams.

The heat burning its way through the pages of this read burns just as hot outside the bubble of our lovebirds' desire than in.  With Georgia meeting opposition at every turn.  Whether it be the cold shoulder and blatant disrespect of her direct superior, Gus.  Or, the sharp tongue and distrust of Alejandro's teen daughter, Valentina.  The drama just keeps coming for Georgia.  But then again...so does Alejandro.

This is the perfect read for those who long to be swept away by heart stopping romance, tossed about by the seas of fate, and rescued by true love...on a horse, of course.

Reviewer's Note:  This is the first novel in a loosely related companion series that may be read in any order.
This review contains only the honest opinions of the reviewer, and is based on the review copy provided.