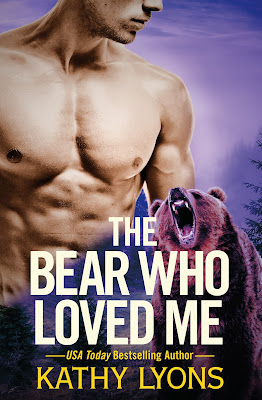 Between singlehandedly running her bakery and raising her teenaged nephew, Becca Weitz thought she had a decent grip on "normal." Then her nephew vanishes, and life as she's known it changes forever. Local legends are true: bear shifters exist . . . and her nephew is part of their clan. As is Carl Carman, the sexy, larger-than-life man who has sworn to find her nephew-and the other young shifters who've gone missing.

As the leader of his clan, Carl is surrounded by enemies. He's learned the hard way that keeping a firm leash on his inner beast is key to survival, though his feelings for Becca test his legendary control. Then danger stalks too close, and Carl realizes he must unleash the raging, primal force within to protect everything he holds dear. But can Becca trust his grizzly side with her life-and her heart?

My Thoughts
Carl Carman, or Mr Max, Maximus of the Gladwin were-bear clan. Thought he had his hands full dealing with irresponsible tree farmer, Nick Markel, and the unwanted attentions of she-bear extraordinaire, and first rate lady cop, Tonya Kappes.
That is, until the day that young Theodore Weitz  goes missing on the eve if his first change.  Leaving Carl (known to the Weitz family simply as Mr. Max) in the unenviable position of having to kidnap Theodore's very distraught, and very human aunt, Becca.
Bringing her to the safety and protection of his den...um...home.  Right in the middle of Gladwin Clan territory.
And...
Bringing both him and his bear within scenting distance of the only woman capable of taming both wild hearts.

You could say that Becca Weitz makes her living dealing in fantasy and fairytales.  At least that is what one would assume; given the large number of castle-shaped cakes that call her bakery home.
But when it come to believing that her missing nephew Theo, is a were-bear, on the verge of his first shift, that he has most likely been kidnapped by humans bent on using him for research, and that her only way to find him lies with her trust of a certain man...bear...man-bear.
Let's just say this baker's gonna need a lot more proof in her proverbial pudding!
The Bear Who Loved Me is the first offering in Kathy Lyons' Grizzlies Gone Wild series. It is also the perfect read for those in search of tender but fierce alpha shifters,  strong and determined leading ladies, and stories so full of laughter, love, and pretzel-like plot twists, that one can't help wanting to sink their canines into every delicious morsel.

And...ahem!
Let's not forget the sex!
Yes.  There is that!
The place where man, woman, and beast come together in some pretty amazing ways.  Although it does (bear) saying, that when it comes to love making...Becca proves that she too, is quite a beast in the bedroom.  But then, with Becca there doesn't seem to be much that she can't do
Let's face it!
She can tame a bear.

Oh damn!  I almost forgot the great supporting cast list.
From Carl's non-shifting brother Allen.  To Mark, the tech genius shifter in the verge of going feral.  There is no shortage of characters just begging to be explored.  in what promises to be a phenomenal paranormal romance series.
Just one more thing!
Because they knew that this first story just wouldn't be enough.  The publisher at Forever even give you a sneak peek at License To Shift (Grislies Gone Wild #2)  Due for release in October 2016.

About the Author:
Kathy Lyons is the wild, adventurous half of USA TODAY bestselling author Jade Lee. A lover of all things fantastical, Kathy spent much of her childhood in Narnia, Middle Earth, Amber, and Earthsea, just to name a few.  There is nothing she adores more than turning an ordinary day into something magical, which is what happens all the time in her books. Winner of several industry awards including the Prism-Best of the Best, Romantic Times Reviewer's Choice, and Fresh Fiction's Steamiest Read, Kathy has published over fifty romance novels, and she's just getting started. Check out her latest news at KathyLyons.com.