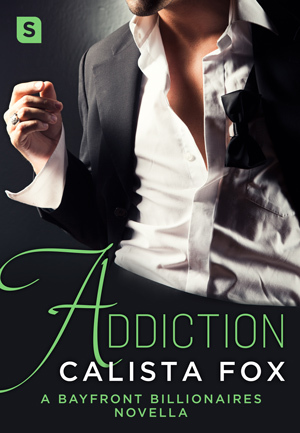 Everyone loves a secret…

Liv Tyner has an ultra-sexy one she’s been keeping all to herself. A sinfully delicious, forbidden secret that has inspired endless fantasy material late into her lonely nights. But when that secret is suddenly staring her in the face—in the form of two fantastically built and wildly successful men—not only does Liv have trouble keeping her one-time-only love triangle under wraps, she also longs for a repeat performance.

Step-brothers Nate Dalton and Tristan Reeves have built a global communications empire that laid the groundwork for their ten-year homecoming to Bayfront. But more important than success is winning the love of the one woman neither has gotten off his mind or out of his system no matter how much time and distance spans between them—sensational and highly addictive Liv Tyner!

As a slow seduction begins and all their juicy secrets are revealed, can these star-crossed lovers find themselves in the right place, at the right time, to make a more permanent love connection?

My Thoughts
Liv Tyner may be THAT girl.  You know the one that seems to have it all.  An actress, stunning beauty, and media darling.  It wouldn't be far from the truth to say that Liv is a woman who has the world in her palm.
But Liv is also a woman with a secret.
A secret guaranteed to bring a blush to her checks and make her heart race.  A secret that she shares with only two others.
The two men who for one night laid claim to her body.  The two men who may have forever laid claim to her heart.

Stepbrothers Nate Dalton and Tristan Reeves have come a long way from the geeky boys that they were in high school.  Now they bear more of a resemblance to Greek gods, than to the shy, tech savvy teens that they once were.  Now they even have the billionaire bank accounts to match.
The one thing that the two billionaire bros have not been able to leave behind?
Their shared feelings for a certain popular beauty.
That one popular girl who dared to look past their awkward exteriors.
The one girl destined to be the friend of their youth, and after a torrid night in Paris during college; so much more.

Addiction is the story that is that perfect blend of sweet and sexy.  Blending the innocent past shared by the three friends in high school.  A secret tryst that none are able to forget.  A desire so strong enough to change futures.

Every aspect of this book seems to build on the one before.  From the homecoming to the meeting.  The revelations to the expressions of their passions.
The one thing that falls flat however, is the easy with which the central conflict is solved.  Because said conflict acts as a major point of dramatic tension for so much of the read.  To have it resolved inn such a neat and tidy way is anticlimactic, to say the least.