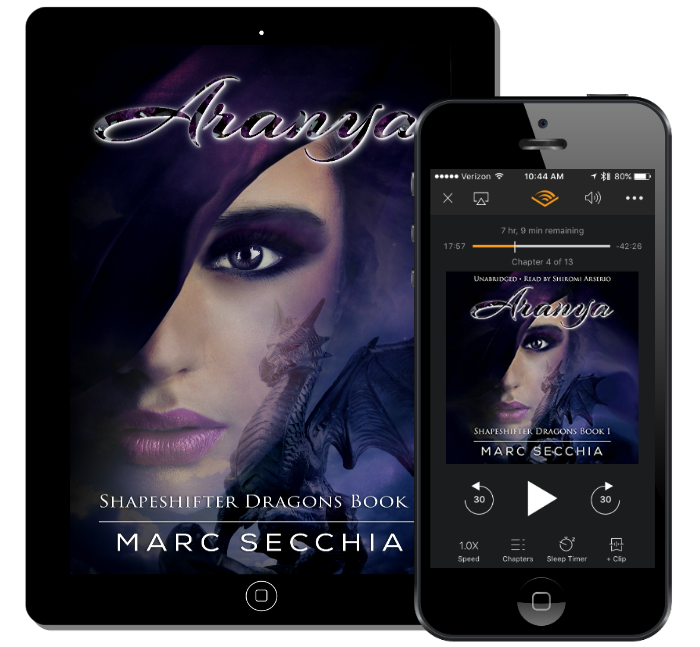 Chained to a rock and tossed off a cliff by her boyfriend, Aranya is executed for high treason against the Sylakian Empire. Falling a league into the deadly Cloudlands is not a fate she ever envisaged. But what if she did not die? What if she could spread her wings and fly? Long ago, Dragons ruled the Island-World above the Cloudlands. But their Human slaves cast off the chains of Dragonish tyranny. Humans spread across the Islands in their flying Dragonships, colonising, building and warring. Now, the all-conquering Sylakians have defeated the last bastion of freedom–the Island-Kingdom of Immadia. Evil has a new enemy. Aranya, Princess of Immadia. Dragon Shapeshifter.

Marc is a South African-born dragon masquerading as an author, who loves writing about dragons and Africa, preferably both at the same time. He lives and works in Ethiopia with his wife and 4 children, 2 dogs and a variable number of marabou storks that roost on the acacia trees out back. On a good night there are also hyenas patrolling the back fence.
He's the author of 21 fantasy books in 3 languages (2 more languages coming this year - watch this space!), including 8 rip-roaring dragon fantasy bestsellers. Dragonfriend won a Gold Award for Fantasy in the 2016 IPPY Book Awards. Look out for Whisper Alive, his latest release. The 4th tale in the Dragonfriend series, Dragonstar, is coming soon! When he's not writing about Africa or dragons Marc can be found travelling to remote locations. He thinks there's nothing better than standing on a mountaintop wondering what lies over the next horizon.

A native of London, England, Shiromi Arserio is a stage actor, voice talent and audiobook narrator. She holds a B.A. in Theatre from Rose Bruford College of Theatre and Performance. In addition to narrating dozens of audiobooks, her voice can be heard in documentaries, e-learning projects and video games such as Nancy Drew: The Shattered Medallion. Shiromi currently resides in the Seattle area with her husband and her two furbabies.

The story told in Aranya is one made to capture the hearts, minds, and imaginations of readers in equal measure.  An undertaking which proves no easy feat under the best of circumstances.  The fact that this book is told from the point of view of a very sheltered teen-aged girl/dragon shifter, for all intents and purposes.  Makes the fact that this book is a universally relatable  marvel of fiction, nothing less than astounding.
This book has everything.  Dragonshifters, friendships, struggles, war, champions, villains, and even a little romance.
Though this is a YA story.  At its heart it is so much more.
Thereby, making it a story whose themes cross the lines of age, class, comprehension levels, etc., with relative ease.

Shiromi Arserio's expert narration of this book is transportive.  Her attention to detail when expressing her characters applied to what was being said, just as much as both the emotion being conveyed by the character's words.
Her masterful expression of this work, coupled with the majesty of the author's world building, character development, and flawless plot make this a book that this reviewer not only recommends.
But one that I have since gone on to purchase the sequel to.

I received this audiobook as part of my participation in a blog tour with Audiobookworm Promotions. The tour is being sponsored by Marc Secchia. The gifting of this audiobook did not affect my opinion of it.