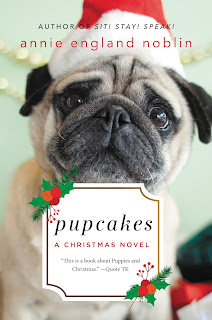 All she wants is a settled-down life.
What she gets is a dog—and a whole new normal . . .
There he stood in the doorway: overweight, depressed and nearly homeless—a pug named Teddy Roosevelt. Teddy was Brydie Benson’s latest problem, arriving on top of her messy divorce and sudden move. Brydie needed a place to start over, so this rent-free home seemed a great idea. She just never counted on Teddy, or his owner, the Germantown Retirement Village’s toughest customer, Pauline Neumann.
And because rent-free doesn’t mean bills-free, Brydie gets a night-shift job at a big-box grocery. Whoever guessed there were so many people who wanted baked goods after midnight?
Then, she gets an idea—why not combine her baking skills with her new-found dog knowledge? And so her store Pupcakes is born. Along with a new start comes a possible new love, in the form of Nathan Reid, a local doctor with a sassy Irish Wolfhound named Sasha. And as fall turns to winter, and then to Christmas, Brydie begins to realize that life is a little bit like learning a new recipe for puff pastry—it takes a few tries to get it just right!

My Thoughts
Pupcakes offers very sweet proof that sometimes life's second chances come equipped with a big heart and four paws.
Brydie Benson never thought that she would be starting her life over as a thirty-something, divorced, former bakery owner.  Who now has the honor of playing babysitter to an elderly pug named Teddy.

But all in the name of room and board.  It seems that a girl's got to do what a girl's got to do.
That is of course if this girl can seem to work out her deep seated issues with her work-aholic mother, and her feelings about her father's death in the process.
That's between falling in love with the local doctor and putting her baking chops to good use as the newest member of the overnight crew at the local mega-store bakery.

If you are in the mood for sugary sweet, melt your heart, romance.  Pupcakes is in dead the romance for you.  Featuring both a character driven and situational plot.  This book is one for those who want to discover the romance within the story for themselves.  Instead of having it served to them on a platter.

This story is also one driven by emotional conflict.  An aspect which helps provide depth and strengthen reader / character relationships, in most cases.  But can sometimes prove a nuisance when said conflict's shelf life has expired.  Because the sstory has progressed past its relevance.  This one and only drawback is the reason that this review is less than 5-star.

This slow simmer of a romance is one that allows the reader to sip slowly at its offerings.  Taking the time to savor both the bitter and the sweet.  In the end managing to come away with a belly full of laughs, a heart full of love, and a head full of paw print covered memories.

After dinner, Nathan refilled their wineglasses and led her into the living room. Sasha and Teddy had settled there as well, and when Nathan built a fire in the fireplace, Teddy dropped right in front of it and started to snore. Sasha wasn’t far behind him.
“The living room at Mrs. Neumann’s house has a fireplace, too,” Brydie said. “I thought about lighting it the other night, but it hasn’t been lit in ages.”
“I’m sure she wouldn’t appreciate it if you burned her house down trying to light the fireplace,” Nathan replied.
“No, I can’t imagine that would make her too happy.”
“Listen,” Nathan said, scooting closer to her on the couch. “I’m sorry if I asked too many intrusive questions earlier. I’m hopeless at small talk, and when I get nervous, I tend to fall back into doctor mode. I swear I didn’t mean to interrogate you over chicken.”
“That’s okay,” Brydie replied. “It was actually kind of nice to talk about it with someone who doesn’t know anything about my life before I moved here.”
“How do you like Memphis so far?”
“It’s getting better,” Brydie said with a sly grin. Between the wine and the fire, she felt deliciously warm.
“I’m glad to hear it.”
Brydie watched him watching her. She liked the way his curly black hair fell in his eyes when he was concentrating. She liked the way his T-shirt fit, not too loose or too tight. She liked the way he asked her questions—soft, curious, but not intrusive. It made her want to tell him everything, anything, just to keep him looking at her. Paying attention to her.
But more than that, she realized, there was something familiar about him, comfortable. She couldn’t put her finger on what it was, but despite the constant butterflies in her stomach, he made her feel calmer somehow. She could understand why people would be drawn to him as a doctor. She could even understand why a woman might visit her elderly aunt in order to be near him.
Nathan moved a hand up to Brydie’s face, tucking a wandering strand of damp hair behind her ear. It sent a bolt of electricity through her, and when he moved his hand away, Brydie felt herself grabbing a fistful of his T-shirt and pulling him closer to her until her mouth was on his, and she could taste the wine on his lips.
Brydie fell back into the couch and pulled Nathan down on top of her. She could feel his hands exploring her body underneath her T-shirt, and she burned with a need she hadn’t known existed until that very moment.
“Do you want—” Nathan began in between frenzied kisses, but before he could finish, the ringing of his phone in his pocket cut him off.
“Ignore it,” Brydie murmured.
“I can’t,” Nathan said, pulling himself away from her with a groan. “I’m on call at the nursing home tonight.” 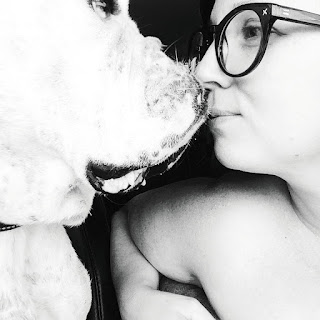 ABOUT ANNIE ENGLAND NOBLIN
Annie England Noblin lives with her son, husband, and three dogs in the Missouri Ozarks. She graduated with an M.A. in creative writing from Missouri State University and currently teaches English and communications for Arkansas State University in Mountain Home, Arkansas. Her poetry has been featured in such publications as the Red Booth Review and the Moon City Review. She spends her free time playing make-believe, feeding stray cats, and working with animal shelters across the country to save homeless dogs.

This one is simple!!!!!!
Follow me on twitter @wtfareyoureadin to win 1 print copy of PUPUCAKES!
Prizes provided through HarperCollins Publishers!

Entrants must be 18 or older and live in the US or Canada.
The winner will be notified via Twitter.
All winner's are chosen randomly!