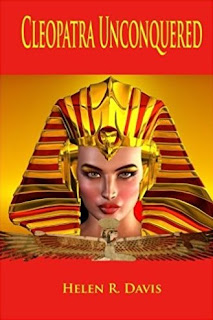 The first book of three in a richly imagined ancient world where the course of history is altered by one battle. In this world, Antony and Cleopatra triumph at the Battle of Actium, and Cleopatra emerges as a queen, stateswoman, and politician. Those around her come to life as the reader returns to those days to live them with her.
"The first in a series, Cleopatra Unconquered by Helen R. Davis is a treat for those fascinated by Egypt and the lost glories of antiquity. The author weaves the fruits of her careful research into a fascinating combination of both the historical fiction and fantasy genres. It gives readers a look into history as it was, as well as into what might have been." - Elena Marie Vidal, author of The Paradise Tree

My Thoughts
Helen R. Davis' reimagining of the life and times of one of histories greatest rulers is nothing less than monumental. The time and attention to detail with which this work is written make it a true joy for both history buffs and those who love a great story.
One of the most intriguing parts of this story has to be Cleopatras connection to her parents and the goddess Nut. This added touch gives something more to a well-known truth in her story.

The one thing that serves a bit of a detraction from the overall, majesty of this first foray into our queen's story is the fact that she serves more of a tactical role in battle than an actual one. Given the fact that this is a retelling. One would expect there to be more creative used at such times.
The being said. This book as well as those to follow are and will be masterworks of imagination and fact worthy of the queen whom they do and will depict.

Helen R. Davis is an American author. Her first novel, Evita: My Argentina was previously published as Evita: My Life and republished with Custom Book Publications in Hong Kong. Her second novel, CLEOPATRA UNCONQUERED, which is the first in a series, imagines a world in which Antony and Cleopatra, rather than Augustus Caesar, are the victors of the Battle of Actium. the sequel, CLEOPATRA VICTORIOUS, will be released soon, followed by the titles CLEOPATRA MAGNIFICA and CLEOPATRA TRIUMPHANT. Her third novel, or at least, her third historical novel/alternate history, THE MOST HAPPY, was published with Callipe Editorial, based out of Madrid Spain, on July 25th, 2017.

Cleopatra Unconquered
Posted by WTF Are You Reading