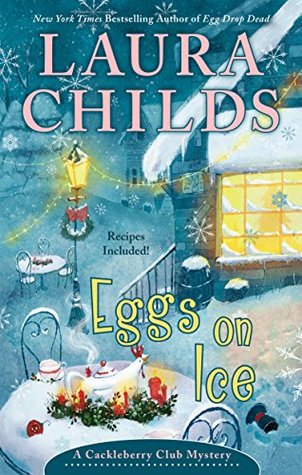 
The Christmas season at the Cackleberry Club café is marred by murder in the latest book in the New York Times bestselling series.
Some say that casting crusty attorney Allen Sharpe as Scrooge in the Kindred Players production of "A Christmas Carol" is just playing to type. He's not the most beloved man in town. In fact, you'd have a dickens of a time finding someone who liked him. Still it's a shock when the Ghost of Christmas Past stabs him during the first rehearsal. Suzanne, co-owner of the Cackleberry Club café, Kindred's favorite combination diner, craft store and bookshop, chases the murderer out of the building but loses him in the alley.
As the days pass the list of suspects grows longer. Is it the disgruntled partner? The former secretary whom Sharpe sexually harrassed? Or is it fellow owner of the Cackleberry Club, Toni's almost ex-husband, Junior? The women of the Cackleberry Club are determined to find the killer before he can add another victim to his Christmas list.

Please Enjoy This Excerpt From:
Eggs On Ice


My Thoughts
This 8th book in the Cackleberry Club series sees Suzanne and Toni front and center for the murder of Allen Sharpe.
Cast as Scrooge in the community play.  In which both ladies are working as crew.
The shady lawyer's murder takes place in plain sight of cast and crew.
With the shroud covered murder barely managing to escape Suzanne after she gives chase.

Though she has been more than warned to keep her sleuthing skills to herself.  Suzanne finds herself drawn into the investigation as news of the murder sets tongues wagging around town.  And more and more of the prime suspects find their way through the doors of the Cackleberry Club for Petra's irresistible fare.  While spilling more than their fair share of coveted gossip tea as to who the elusive killer might be.

This is by far one of the most enjoyable books in this series. Toni provides just the right amount of comic relief to balance out Suzanne's more practical approach to whodunit.
Add in Petra's sage advice and an ever growing list of suspects and motives for the esquire's extinction.
And what one gets is a cozy mystery worth its weight in hot cocoa and fuzzy socks.
This is the kind of book that keeps the pages turning just out of a sheer "need to know" who, why, or what will happen next.

Reviewer's Note:
This 8th book in the Cackleberry Club series is one that may be read as part of its intended series or as a standalone.
I received this book for review from First To Read.