"Cowboy Rebel" Without A Cause? 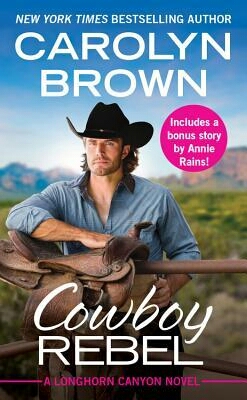 The next heartwarming romance in this USA Today bestselling series proves it's tough to resist a sexy cowboy with a Texas drawl and heart of gold! Includes a bonus novella by Annie Rains!

A WILD COWBOY WITH A BIG HEART
Ever since losing his best friend in a motorcycle accident, Taggart Baker wants to make every moment count. No dare is too dangerous, no adventure too crazy for this cowboy. But after one bad brush with the law, he realizes it's time to ditch his hooligan friends and grow up. Now he's running his own ranch next to the Longhorn Canyon spread in Texas. Still, no one would ever call him tame.


Nikki Grady has worked too hard for her RN license just to throw it away for some reckless cowboy who shows up in her emergency room after a barroom brawl. But she can't help being drawn to Tag's sense of humor and those crystal blue eyes. The more time they spend together, the more she sees his good heart. But just as Tag seems ready to settle down for good, his troubled past comes calling-and this time he won't be able to walk away so easily.

Includes the bonus novella A Wedding on Lavender Hill by Annie Rains: When an event planner is asked to create the perfect wedding in just three days, she must turn to the last person she wants to ask for help -- the infuriating owner of the house on the hilltop.

Cade passed out straw hats to everyone as they filed out to get on the hay wagon, and Retta was more than glad to settle her new straw hat on her head. It didn’t feel as good as the one she’d left behind at the farm but with sweat and time it would shape up and fit right well.
“I like my hat. It’s like Cade’s. ” Benjy plopped the one with his name on the inside down on his head.
“Me too.” Alice crammed hers down on her braids. “Do we get to come back next year?”
“I need to draw the wagon. Some hay wagons have wood wheels.” Benjy walked away and chose a seat at the back of the wagon.
“Once you turn thirteen, you don’t get to come back,” Retta explained in a low voice.
“I’m only ten so that means I might get to do this again.” She beamed as she skipped down the porch steps.
The tires on the old wooden wagon made the ride a little less bumpy. But the wagon itself was the same as she’d been in dozens of times as a kid. Open air, benches on two sides, and hay strewn on the floor. She spotted a cooler at the back and figured that it was full of either water bottles or cold drinks.
She sat down beside Alice, and Sasha quickly sat on the other side of her, which meant again that Gabby and Faith had no choice but to sit together. Maybe Cade was right about making them learn teamwork.
Skip pointed toward the pasture where Levi was baling hay. “This is a self-supporting ranch as much as possible. We grow our own hay for the cattle in the winter.”
Retta listened with one ear but if she leaned far enough to one side, she could see Cade’s face reflected in the side mirror on the tractor pulling the wagon.
“Those are some whompin’ big hunks of hay to be picking up,” Faith said.
Retta quickly jerked her head back. “Those will stay in the field. They’ll line them up against the far fence line and then bring them to the cattle as they are needed.”
Skip nodded. “Look over in that field at those small bales. Those are the ones that we take into the barn. We don’t make a lot of the little ones, but sometimes they’re needed in the stalls if we’ve got a cow or a bull that has to be kept up for a while.”
“I could get them bales to the barn,” Nelson said.
“Yeah, right?” Kirk smarted off.
“I can and if I do, then I make money to take home, right, Skip?” Nelson asked.
“That’s right, and we can always use all the help we can get.”
Retta could see dollar signs dancing in all of their little eyes as they thought about helping haul that hay to the barn the next day. When she looked at the mirror again, she caught Cade’s eye and he winked at her, causing a blush so deep that she removed her hat and fanned with it


My Thoughts
Carolyn Brown's Cowboy Rebel is a very sweet but slow moving romance.  Staring one Taggart Baker as the afore mentioned Cowboy Rebel and nurse, Nikki Grady, as his very wary love interest.
It is quite clear from the start, that the author really wants the point of Taggart's irrepressible nature driven surely and squarely home in the reader's mind.
Due in large part to the the fact that something to the effect of "What did you do this time?" is always being said by someone  that he knows.
Which would be fine except for the fact that this latest altercation is in no way started by Tag.
Furthermore, his participation in said altercation is only brought about by his need to protect a woman that he deems to be in danger.
So readers are trapped in a mire of such manutia for pages. For what is in reality an act of chivalry!
What?

As for Taggart's leading Lady.  Nikki Grady is a nurse.  Who in addition to wanting to save the world.  Wants nothing more than to mold Taggart in to her interpretation of the perfect man.
A.k.a. His brother Hud.
And who, in spite of many very endearing attempts by Taggart.  Refuses to even consider his suit.  Although she fulls acknowledges her attraction to him.
This is another foray into pointless repetition that turns what would have been the start to a wonderful reading experience into a labor of Sisyphus.

Things do get better.  Or at least a little more interesting at about midway through the book.  When we are treated to the who's why's and wherefores of Taggart's bad boy past.
And the beginning of Nikki's change of heart regarding her relationship with the formerly unrelatable Taggart.
There is also the Taggart's quest to name and brand the ranch.  And Nikki's rather strange and slightly dictatorial relationship with her mother
Coupled with the general low level hum of a small time gossip hive.  Filled to the brim with busybodies dying to share two cents worth of wisdom on a ten dollar day.

This is a great "passing the time" read.  Something to read on the bus or a the the beach etc.
This is also the fourth book in an interrelated series.
You may read it as a standalone or as part of its intended series. 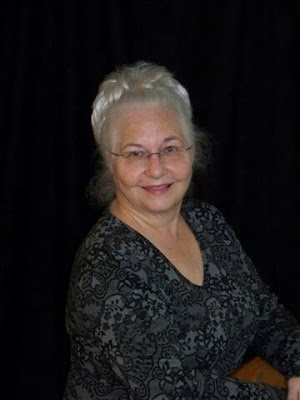 Hi! I'm twenty five years old and movie star gorgeous. The camera added thirty plus years and a few wrinkles. Can't trust those cameras or mirrors either. Along with bathroom scales they are notorious liars! Honestly, I am the mother of three fantastic grown children who've made me laugh and given me more story ideas than I could ever write. My husband, Charles, is my strongest supporter and my best friend. He's even willing to eat fast food and help with the laundry while I finish one more chapter! Life is good and I am blessed!

Reading has been a passion since I was five years old and figured out those were words on book pages. As soon as my chubby little fingers found they could put words on a Big Chief tablet with a fat pencil, I was on my way. Writing joined reading in my list of passions. I will read anything from the back of the Cheerio's box to Faulkner and love every bit of it. In addition to reading I enjoy cooking, my family and the ocean. I love the Florida beaches. Listening to the ocean waves puts my writing brain into high gear.

I love writing romance because it's about emotions and relationships. Human nature hasn't changed a bit since Eve coveted the fruit in the Garden of Eden. Settings change. Plots change. Names change. Times change. But love is love and men and women have been falling in and out of it forever. Romance is about emotions: love, hate, anger, laughter... all of it. If I can make you laugh until your sides ache or grab a tissue then I've touched your emotions and accomplished what every writer sets out to do.

I got serious about writing when my third child was born and had her days and nights mixed up. I had to stay up all night anyway and it was very quiet so I invested in a spiral back notebook and sharpened a few pencils. The story that emerged has never sold but it's brought in enough rejection slips to put the Redwood Forest on the endangered list. In 1997 Kensington bought two books for their Precious Gems line. Two years and six books later the line died with only four of those books seeing publication. But by then Avalon had bought a book and another, and another. Ten years later the list has grown to thirty nine. Last year Sourcebooks bought the Lucky Series which is in the bookstores now. They've also bought The Honky Tonk Series which will debut with I LOVE THIS BAR in June and will be followed by HELL, YEAH, MY GIVE A DAMN'S BUSTED, and HONKY TONK CHRISTMAS.

Folks ask me where I get my ideas. Three kids, fifteen grandchildren, two great grandchildren. Note: I was a very young grandmother! Life is a zoo around here when they all come home. In one Sunday afternoon there's enough ideas to keep me writing for years and years. Seriously, ideas pop up at the craziest times. When one sinks its roots into my mind, I have no choice but to write the story. And while I'm writing the characters peek over my shoulder and make sure I'm telling it right and not exaggerating too much. Pesky little devils, they are!

I have a wonderful agent, Erin Niumata, who continues to work magic and sell my work. I'm very lucky to have her and my editors who continue to believe in me.