"Drakon's Knight" Could Use A Lot More Dragon 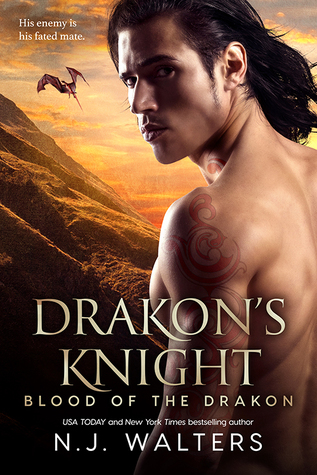 
Drakon Jericho Drake, the child of a pure-blood dragon and human, has a simple plan: Kill the leader of the Knights of the Dragon and start a war. Except, when he meets his target, Karina Azarov, she can’t remember who she is. Worst of all––he can’t kill her. His dragon side has just claimed the dangerous woman as his mate.

Karina has no idea why these Drakon’s have taken her to their home. And she most certainly does not understand why she’s so drawn to her captor. Maybe because he’s strong, intelligent, and caring, in his enigmatic sort of way. One thing she knows, he’s not going to hurt her. If only she could remember something from her past that would explain why these Drakon’s hate her so much. But if her memory returns, mated or not, he may get his war.. And one of them will die.

Drakon's Knight, book number 7 in the Blood Of The Drakonseries. Is one that while beguiling on the romantic sense. Falls rather short when it comes to action, world building, and character development.
Ringing in on opposite sides of an already untenable situation. We have Drakon Huntress extraordinaire, Karina Azarov.
Leader of the Knights Of The Dragon, and first in line to kill any and all Drakons.
Pitted against her seriously hunky adversary turned love interest. One Jericho Drake.
Who, as fate and the dragon powers- that- be would have it. Have made it his mission to kill.
But...

Surprise of all surprises. When the time comes to do the dastardly deed. He can't.
Because his dragon recognizes her as his mate.
She, on the other hand. Is not recognizing anything. Not even herself.
Anybody want to hazard a guess as to why?
Well...
Those of you who guessed amnesia, get the cookie.
Complicating matters further is the mystery of the strange tatoo on her shoulder. Which is believed to be a ward of some sort.
A ward that is now broken or diminished. Due to Jericho's earlier attempt on her life.
Great little oberos we have going there, huh?

Strangely enough however. With the mysteries of her identity, the whereabouts of the people who may or not be searching for her, and the secret of her tattoo looming large.
The one thing that Karina does seem to rely on as her North Star in this convolution of uncertainty is her undeniable attraction to Jericho.
Which sends the plot into the pit of romantic quicksand.
Excluding action scenes, exploration of Jericho's dragon form, and all manner of plot enriching elements which could have been employed here.
Thereby changing what could have been a very rich and fully expressed story into something...
Much less.
In short.
Acquire love interest.
Inta-love
Ensure that insta-love is true on both sides.
Have sex.
Have more sex.
Tie up all loose story elements by book's end.
Cue HEA.
The IKEA version of romance.
The story is good.
With just a little more work. It could be better.
But as it stands, is a far cry from it's best.
Thank you to Entangled Publishing and Netgalley for providing a copy of this book in exchange for my honest review.

About N. J. Walters
Once upon a time N.J. had the idea that she would like to quit her job at the bookstore, sell everything she owned, leave her hometown, and write romance novels in a place where no one knew her. And she did. Two years later, she went back to the bookstore and her hometown and settled in for another seven years.

N.J. Walters is a New York Times and USA Today bestselling author who has always been a voracious reader, and now she spends her days writing novels of her own. Vampires, werewolves, dragons, time-travelers, seductive handymen, and next-door neighbors with smoldering good looks—all vie for her attention. It’s a tough life, but someone’s got to live it.