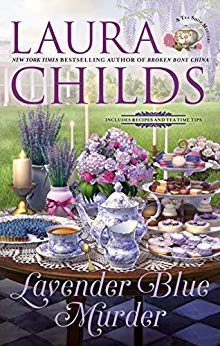 Tea maven Theodosia Browning and her tea sommelier Drayton Conneley are guests at a bird hunt styled in the precise manner of an English shooting party. Which means elevenses (sloe gin fizzes), gun loaders, the drawing of pegs, fine looking bird dogs, and shooting costumes of tweed, herringbone, and suede.
But as gunshots explode like a riff of Black Cat firecrackers, another shot sounds too close for comfort to Theodosia and Drayton. Intrigued but worried, Theodosia wanders into the neighbor's lavender field where she discovers their host, Reginald Doyle, bleeding to death.
His wife, Meredith, is beside herself with grief and begs Theodosia and Drayton to stay the night. But Theodosia awakens at 2:00A.M. to find smoke in her room and the house on fire. As the fire department screams in and the investigating sheriff returns, Meredith again pleads with Theodosia for help.
As Theodosia investigates, fingers are pointed, secrets are uncovered, Reginald's daughter-in-law goes missing presumed drowned, and Meredith is determined to find answers via a séance. All the while Theodosia worries if she's made a mistake in inviting a prime suspect to her upscale Lavender Lady Tea.

Laura Child's 21st offering in her Tea Shop Mystery series, finds Theodosia and Drayton on an English-styled bird hunt. That ends in murder.

Pharmaceutical CEO, Reginald Doyle presents himself as nothing less than the aging lord of the manner. When he opens his plantation home to friends and family on the beautiful autumn day of his hunt. Little did she or anyone know that he was the intended prey.

Of course as fate and Ms. Child's formulaic writing style would have it. Theodosia and Drayton are first on the scene. Doing all they can to rescue a fatally wounded Reginald.
Only to have him succumb to said wounds. Leaving them to begin the search for his killer.
Making matters worse for the characters, and a bit more interesting for readers. Is the subsequent fire which damages the main house and nearly costs Reginald's son Alex his life. Before his father's body is even cold.

At which point...
Readers, Theodosia, Drayton, and crew are off.
Compiling suspects, alibis, and motives.
Some of which include:
-Business deals
-A strip of land separating his plantation from the lavender far next door.
And more.

And once again...
Here come the layers.
When the sudden disappearance of Reginald's daughter-in-law, Fawn.

And back to the formula we go.
The wonderful descriptions of the people and places of Charleston, S.C.
The Lavender-themed event hosted at Theodosia's Indigo Tea Shop.
The admonishment from Tidwell and Riley. Aka the police. To stay out of the literal and figurative lines of fire.
The Theodosia saves the day at her own reckless peril "ending".
All in all...
This book is simply "more of the same". As far as the series is concerned. As was mentioned above. There were more than a few layers that proved unnecessary in the grand scheme of things.

**Thanks to Netgalley and Berkley for providing the review copy of the above referenced literary work.