"The Highwayman" Is A Story Tailor Made To Hijack Hearts 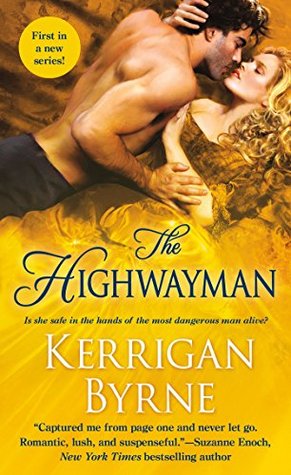 They’re rebels, scoundrels, and blackguards—dark, dashing men on the wrong side of the law. But for the women who love them, a hint of danger only makes the heart beat faster…

STEALING BEAUTY
Dorian Blackwell, the Blackheart of Ben More, is a ruthless villain. Scarred and hard-hearted, Dorian is one of London’s wealthiest, most influential men who will stop at nothing to wreak vengeance on those who’ve wronged him…and will fight to the death to seize what he wants. The lovely, still innocent widow Farah Leigh Mackenzie is no exception—and soon Dorian whisks the beautiful lass away to his sanctuary in the wild Highlands…

COURTING DESIRE
But Farah is no one’s puppet. She possesses a powerful secret—one that threatens her very life. When being held captive by Dorian proves to be the only way to keep Farah safe from those who would see her dead, Dorian makes Farah a scandalous proposition: marry him for protection in exchange for using her secret to help him exact revenge on his enemies. But what the Blackheart of Ben More never could have imagined is that Farah has terms of her own, igniting a tempestuous desire that consumes them both. Could it be that the woman he captured is the only one who can touch the black heart he’d long thought dead?

What People Are Saying About...
The Highwayman
By
Kerrigan Byrne


What people are saying
“A passionate, lyrical romance that takes your breath away. From the first page, you’ll fall in love.”
– Elizabeth Boyle, New York Times Bestselling Author
“Captured me from page one and never let go. Romantic, lush, and suspenseful.”
– Suzanne Enoch, New York Times bestselling author
4 1/2 STAR  “From the first page, the depth of emotion and sexual tension is perfectly matched by the strong characters and superb plotting. This marriage-of-convenience love story proves why Byrne is a force in the genre.”
– RT Magazine
“A sensual, soul-searing story readers won’t want to see end. Fortunately, this is the first in a new linked series featuring men who live by their wits and the canny women who are strong and fearless enough to teach them to love. Brilliantly done.”
– Library Journal
“The romance is raw, edgy, and explosive.”
– Publisher’s Weekly


My Thoughts
Dorian and Farah are two people who are and always will be tailor-made for each other.
Two souls forged in battle.  Shaped and polished against life's rougher edges.
She...
Serving on the right side of the law.  As a clerk of Scotland Yard.
He...
Taking a decidedly darker path.  As The Blackheart Of Ben Mor.  One of London's most wealthy and influential criminals.
Ever living as two sides of the same coin.
A coin forged in childhood.  Cast in the metal of love and innocence.  Ever cradled in the scarred hands of an orphaned boy.  And the hopeful heart of his golden haired "Fairy".

A coin seemly lost to the ravages of time. And marred by tragedy.
Forcing each of its halves to forge separate existences.  Lonely existences.  Clinging to the hope that they might one day be together.  In this life or the next.
Opening eyes to sunrises heralding days lived. But never really savored until the day that hungry eyes meet across an interrogation room in Scotland Yard.
Beginning anew, the process of melding two lives, two hearts, and two destinies.

What one might be quick to categorize as a "Beauty And The Beast" story.  With Dorian playing the scarred and tortured "dark knight".
Quickly becomes a case of  Scottish Bonnie And Clyde.  As we come to realize that Farah is truly the equal of her leading man.
Complimenting him as perfectly as the moon compliments the sun.
Matching him...
Strength for strength.
Secret for secret.
Pain for pain
Pleasure for pleasure.

Their "matched set" distinction made all the more valid.  When she becomes Dorian's willing submissive during their love scenes.
And they are "love scenes".  Because each encounter allows the reader to see Dorian's fear.
Fear of rejection,
Fear of his past.
Fear of  loss.
Fear of himself.
While allowing readers to simultaneously experience Farah's capacity for love, acceptance, trust, and surrender.
The very definition of "topping from below."


Kerrigan Byrne is an authoress possessed of the rare and most extraordinary gift of layered story-craft.
A gift that she shares with her audience with a seeming effortlessness.  Which allows readers to become so immersed in the sights, sounds, sensations, and emotions experienced by each character.  That one literally seems inhabit him or her for a time.   Morphing, changing, growing, and learning just as their chosen host does.
It is the hope of this reviewer that every lover of a well told story, romance, or unforgettable "happily ever after" journey the road held captive by Kerrigan Byrne's The Highwayman.

If you're anything like me, the best night is one spent with a brawny highlander, a mysterious werewolf, a conflicted vampire, or a hot-headed Irishman. My stories span the spectrum of romantic fiction from historical, to paranormal, to romantic suspense. But I can always promise my readers one thing: memorable and sexy Celtic heroes who are guaranteed to heat your blood before they steal your heart. Lose yourself in the enchanted Celtic Isles, you never know who, or what, will find you...
See Her Socially:  Web / Instagram / Twitter / Facebook