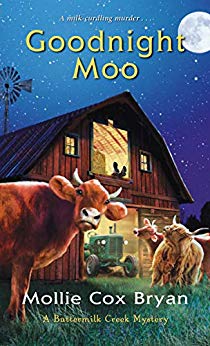 With a foster cow in her corral and a new calf on the way, Brynn MacAlister has a lot on her plate. Especially since her micro-dairy farm is hosting the first annual cheesemakers contest at this year's summer fair. A relative newcomer, Brynn's hoping the contest becomes a tradition, bonding her even more strongly to the community. But when a mysterious tractor accident looks suspiciously like murder, Brynn suspects someone is up to
no-gouda . . .

Some folks say the lead suspect was just defending his underage daughter from a suitor more mature than a vintage provolone, but Brynn isn't buying it. Especially when another dead body turns up and Brynn's top cheesemaker falls under suspicion. It's enough to make a girl bluer than her best Stilton. But not enough to stop Brynn from getting to the bottom of things. What she discovers is the small town harbors some pretty unsavory characters. And the closer Brynn gets to the killer, the deeper she gets into danger . . .


My Thoughts
Goodnight Moo has just the right balance of  'small town' charm, 'hold my cow' cuteness, likable,  characters, and murder, murder, murder, everywhere that seems to keep the pages turning.
Leading lady, Brynn MacAlister, finally seems to be finding her place in the micro farming community of Shenandoah Springs, Virginia.
After having survived all of the mayhem of Christmas Cow Bells. (A Buttermilk Creek Mystery #1).

Anyone would assume that with the impending birth of a new calf looming.  The surprise foster of a homeless Highland cow named Jewel.  And her farm's hosting of the first annual cheese maker's contest.  Brynn and her gang wouldn't have room to sleep.  Let alone, find themselves at the center of anything nefarious.
Right?
Well...not exactly!

And then Wes, Brynn's right hand and apprentice at Buttermilk Creek is also arrested on murder charges.  In connection with a gun that he is said to have owned being used in the murder of yet another summer hire.  By the name of Donny Iser.
Who, for the record.  Also had ties to...
DUN...
DUN...
DUN...
Farmer Josh's underage daughter, Chelsea!

Anybody else see a pattern here?
Just me?
OK?
But I digress...
Welcome to pages and pages more of murder, and reasons for murder, family togetherness, sleuthing, cheese, recipes...and COWS.

This is a quick but not so light cozy.  That leaves one wondering 'how so much shade can possibly go on in a town where everyone is so keen on everyone else's business?'
There is a great diversity of character ethnicity in this read.  And a true to life depiction of close mindedness and judgment can go hand in hand with regard to supposition of guilt.
But the overall feeling of community and family.  As well as an ending that no one sees coming is what make this book truly well worth the read.

Thanks goes out to NetGalley and Kensington Publishing for supplying the unsolicited review copy on which this review is based.  Opinions found herein, are those of this reviewer and have not been influenced in any way.

Mollie Cox Bryan is a writer of women’s stories.  Her stories have many forms: cookbooks, articles, essays, poetry and fiction.  Mollie grew up near Pittsburgh, Pa., and attended Point Park University, where she received a B.A. in Journalism and Communications. Her first real job out of college was as a paste-up artist at a small newspaper, where she was allowed to write “on her own time” and she did.

Mollie moved to the Washington, D.C. area, where she held a number of writing jobs, and has written about a diverse array of subjects, such as construction, mathematics education, and life insurance. While working in the editorial field, Mollie began taking poetry classes at the Writer’s Center in Bethesda, Md. Soon, she was leading local poetry workshops and was selected to participate in the prestigious Jenny McKean Moore Poetry Workshop.

In 1999, shortly after the birth of her first daughter, Emma, Mollie and her husband moved to the Shenandoah Valley of Va. (Waynesboro), where he took a job at the Frontier Culture Museum and she stayed at home to take care of Emma and start a freelancing career.

She was honored with an Agatha Award nomination for her first novel, SCRAPBOOK OF SECRETS. Several books in the Cumberland Creek series have received People’s Choice nominations from the Library of Virginia.