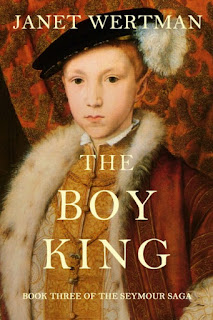 THE BOY KING BY JANET WERTMAN

The Unsuspecting Reign of Edward Tudor

Motherless since birth and newly bereft of his father, Henry VIII, nine-year-old Edward Tudor ascends to the throne of England and quickly learns that he cannot trust anyone, even himself.

Edward is at first relieved that his uncle, the new Duke of Somerset, will act on his behalf as Lord Protector, but this consolation evaporates as jealousy spreads through the court. Challengers arise on all sides to wrest control of the child king, and through him, England.

While Edward can bring frustratingly little direction to the Council’s policies, he refuses to abandon his one firm conviction: that Catholicism has no place in England. When Edward falls ill, this steadfast belief threatens England’s best hope for a smooth succession: the transfer of the throne to Edward’s very Catholic half-sister, Mary Tudor, whose heart’s desire is to return the realm to the way it worshipped in her mother’s day.

Please enjoy this excerpt from...
The Boy King
By
Janet Wertman
My Thoughts
This beautifully expressed third volume in Janet Wertman's Seymour Saga.  Is the last installment in what is A very captivating period in the lives of the Seymores, Tudors, as well as for the English as a people.
Young Edward's life is one that marked with tragedy and loss from birth.
First, at the death of his mother at his birth.  Followed by the death of his father and his ascension to the English throne at the tender age of nine.
Lastly, when he becomes A pawn in the efforts of those around him to censure his sister Mary.  Keeping her and the Catholic faith from gaining the traction that would unseat the influence the the newer, sanctioned, Protestant Church.

While I will refrain from revealing you with the long and illustrious list of the notable and notorious players in the political history of England and the isles. That I will leave to the history books.
Because for me.  This book while accurate historically, provides one with an emotionally evocative personal story.
Narrated in the voices of Mary and Edward.  Readers get to see an or
intentional and well orchestrated effort to break the bonds of familial affections between A brother and a sister.  To further political plots.
With both Edward the person and Edward the king being offered up as the ultimate sacrificial lamb.
This beautiful book will draw you in from the first page. Holding both your heart and mind captive well beyond its last sentence.
While there are quite a number of times within the course of this book that upset me to the point of wanting to send my Kindle flying.  I must say that I am a great deal richer for having experienced this story.

Janet Ambrosi Wertman grew up within walking distance of three bookstores and a library on Manhattan’s Upper West Side – and she visited all of them regularly. Her grandfather was an antiquarian bookdealer who taught her that there would always be a market for quirky, interesting books. He was the one who persuaded Janet’s parents to send her to the French school where she was taught to aspire to long (grammatically correct) sentences as the hallmark of a skillful writer. She lived that lesson until she got to Barnard College. Short sentences were the rule there. She complied. She reached a happy medium when she got to law school – complicated sentences alternating with short ones in a happy mix.

Janet spent fifteen years as a corporate lawyer in New York, she even got to do a little writing on the side (she co-authored The Executive Compensation Answer Book, which was published by Panel Publishers back in 1991). But when her first and second children were born, she decided to change her lifestyle. She and her husband transformed their lives in 1997, moving to Los Angeles and changing careers. Janet became a grantwriter (and will tell anyone who will listen that the grants she’s written have resulted in more than $30 million for the amazing non-profits she is proud to represent) and took up writing fiction.

There was never any question about the topic of the fiction: Janet has harbored a passion for the Tudor Kings and Queens since her parents let her stay up late to watch the televised Masterpiece Theatre series (both The Six Wives of Henry VIII and Elizabeth R) when she was *cough* eight years old. One of the highlights of Janet’s youth was being allowed to visit the Pierpont Morgan Library on a day when it was closed to the public and examine (though not touch!) books from Queen Elizabeth’s personal library and actual letters that the young Princess Elizabeth (technically Lady Elizabeth…) had written.

The Boy King is third book in the Seymour Saga, the story of the unlikely dynasty that shaped the Tudor era. The first book, Jane the Quene, tells the story of Jane Seymour’s marriage to Henry VIII; and The Path to Somerset, chronicles Edward Seymour’s rise after Jane’s death to become Lord Protector of England and Duke of Somerset (taking us right through Henry’s crazy years). Janet is currently working on a new trilogy about Elizabeth, and preparing to publish her translation of a nineteenth century biography of Henry. And because you can never have too much Tudors in your life, Janet also attends book club meetings and participates in panels and discussions through History Talks!, a group of historical novelists from Southern California who work with libraries around the state.

Monday, October 19
Review at Pursuing Stacie
Feature at I’m All About Books
Review at WTF Are You Reading?

Friday, October 23
Review at Books and Zebras
Feature at What Is That Book About

Sunday, October 25
Excerpt at Passages to the Past

Thursday, October 29
Review at A Books and a Latte

During the Blog Tour, we are giving away a copy of The Boy King by Janet Wertman! To enter, please use the Gleam form below.

The giveaway is open to US residents only and ends on October 30th. You must be 18 or older to enter.