"Back In A Spell" Weaves A Romantic Enchantment That One Never Wants To Leave...

Title:  Back In A Spell
Series:  Witches Of Whistle Grove #3
Author:  Lana Harper
Format:  ERC
Length:  336 pages
Publisher:  Berkley
Rating:  4.5 Stars
An awkward first date leads to a sparkling romance between one of the most powerful witches in town and a magical newbie in this rom-com by Lana Harper, New York Times bestselling author of Payback’s a Witch.Even though she won’t deny her love for pretty (and pricey) things, Nineve Blackmoore is almost painfully down-to-earth and sensible by Blackmoore standards. But after a year of nursing a broken heart inflicted by the fiancée who all but ditched her at the altar, the powerful witch is sick of feeling low and is ready to try something drastically different: a dating app.At her best friend’s urging, Nina goes on a date with Morty Gutierrez, the nonbinary, offbeat soul of spontaneity and co-owner of the Shamrock Cauldron. Their date goes about as well as can be expected of most online dates—awkward and terrible. To make matters worse, once Morty discovers Nina’s last name, he’s far from a fan; it turns out that the Blackmoores have been bullishly trying to buy the Shamrock out from under Morty and his family.But when Morty begins developing magical powers—something that usually only happens to committed romantic partners once they officially join a founding family—at the same time that Nina’s own magic surges beyond her control, Nina must manage Morty’s rude awakening to the hidden magical world, uncover its cause, and face the intensity of their own burgeoning connection. But what happens when that connection is tied to Nina’s power surge, a power she’s finding nearly as addictive as Morty’s presence in her life?
Please enjoy this exclusive excerpt from
Back In A Spell
by
Lana Harper

My Thoughts
Nineve Blackmore is the sensible one.   Buttoned up...
Dependable...
Pearls and sweater sets classic...
And...
Ready for love?
Ìt seems so.
After a year of recovering from the broken heart that her ex-fiancèe, Sydney, left behind.
It seems that her bestie (non magical...btw.)  Is determined to find the perfect mate to free her most buttoned up buddy.
Enter one Morty Gutierrez.
Decidedly non magical.  At least in the spells and charms sense  of the word.
But that does little to stop this beautiful, non binary person being absolutely "magically delicious" in every other respect. 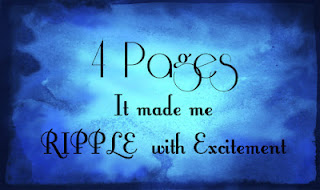 Back In A Spell is the third offering in the Witches Of Thistle Grove series.  And shows readers a softer and more emotional side of magic.
Most of which is brought to the fore by Morty.
But things really get interesting when the previously 'normie' Morty, is getting more magical.  The closer he/they get to their lady love.
This book is a wonderful addition to the WOTG stable.
The sensitivity, humor, romance, and magic; make the hours spent reading pass faster then one can say ABBRACADABBRA.
In short...
This book is wonderful!
Now...
Where's the next one? Lol!
Reviewer's Caveat
There has been much unnecessary ado about the use of Morty's pronouns within the scope of his and Nineve's relationship.
To this, as a card carrying member of the rainbow squad.
I say PLEASE STOP!
He said that his pronouns were he / they.  Giving her a CHOICE  of which to use.
If you would rather sit and debate proper pronoun usage in fiction.  Rather than enjoy a great story. Knock yourself out.
I'm sure Merriem Webster would be proud.
As for the rest of us...
We'll be reading and loving the book.
Reviewer's Note
The opinions expressed in this critique are those of WTF Are You Reading?
And have not been influenced by Berkley or any third-party.
Many thanks to Berkley and Netgalley for providing the review copy  on which said review is based.
Back In A Spell can be read alone. But is best enjoyed as part of its intended series.

Lana is the New York Times bestselling author of Payback's A Witch and the forthcoming From Bad to Cursed from Berkley Books. Writing as Lana Popovic, she is also the author of YA novels Wicked Like a Wildfire, Fierce Like a Firestorm, Blood Countess, and Poison Priestess. Lana studied psychology and literature at Yale University, law at Boston University, and is a graduate of the Emerson College publishing and writing master's program. She was born in Serbia and lived in Bulgaria, Hungary, and Romania before moving to the United States, where she now lives in Chicago with her family.